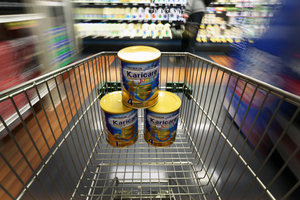 The Ministry for Primary Industries has revealed that the dairy products remain suspended from the Chinese market due to last year's botulism scare.

The Chinese ban affects Fonterra's bulk whey protein and infant formula base powders. Fonterra says these powders can enter China, but only in processed form.

Fonterra's shareholders council says it only learned the ban was ongoing this week and is working on questions to put to the co-operative.

The Prime Minister says the extent to which shareholders were aware restrictions were still in place is a matter for Fonterra, not the Government. He says he did all he could on his recent trip to China to reassure officials and the Chinese public that whey and infant formula from New Zealand was safe.

John Key says the overwhelming bulk of Fonterra product is moving across the border but until final issues around the whey and infant formula scare are worked through authorities in China won't sign the products off.

Labour's Primary Industries spokesperson Damien O'Connor says it will be a major blow to farmer confidence in Fonterra.

Along with Fonterra's farmers, the infant formula industry was under the impression that all trade had returned to normal.

Chairman of the Infant Formula Exporters Council Michael Barnett says he believed all the market access issues surrounding infant formula exports to China had been resolved following the Prime Minister recent trip there. He says he's absolutely surprised to hear that they haven't been.

Fonterra said in a statement on Thursday that China's temporary suspension of whey powder and base powder imports from New Zealand represents less than 3 percent of the country's total dairy exports to China and none of its other products are affected.

The dairy company says given the suspension has been in place since it announced the precautionary recall in August last year, the affected product represents such a small amount of its exports and overall trade volumes to China have increased 15 percent compared with 2013.

The co-operative said it regularly updates its farmers on the company's operations, performance and the progress made relating Fonterra's recovery following the August recall.