The sight of kiwi scratching the grass on Richard Gardner's farm near Kaipara is now a common sight, thanks to his family's dedication to a restoration project in the area. 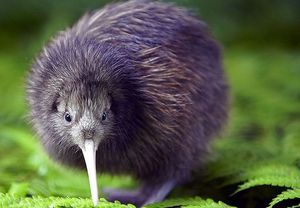 Richard Gardner says they've been controlling pests in a fenced-off area of bush on his land and last year decided to introduce kiwi back into the area for the first time in 50 years.

He says his sister, Gill Adshead, and her husband, Kevin, were initially behind the restoration of 400 hectares of native bush, which is now home to kiwi.

Mr Gardner says the project has been very successful and they have had several breeding pairs establish.

He says the kiwi haven't just kept to the undergrowth.

"They run around the farm, the whole farm, they just don't stay in the bush they come out and run around all the farm at night".

"They go around the paddocks as much as anything else and eat a lot of crickets and things at this time of year."

Mr Gardner says kiwi-proof fences have had to be introduced to stop them getting out onto the road.

He says the Bank of New Zealand and the Department of Conservation are contributing money to help his family with their project.