An organisation representing many of New Zealand's infant formula producers believes Chinese mothers are being misled by sellers of the formula. 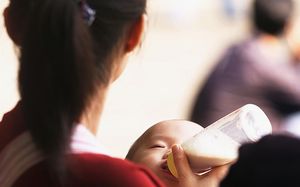 The Infant Nutrition Council is trying to make sure companies here are not involved in undermining breast feeding in China.

It held a workshop in Auckland last week to remind companies of the rules around marketing formula.

Council chief executive Jan Carey says both New Zealand and China have signed the World Health Organisation code for the marketing of breast milk substitutes - which means they have agreed to public health goals of supporting and promoting breast feeding and the appropriate use of formula when necessary.

However, she says the opposite occurs in China.

"We know that the way infant formula is marketed in China sometimes you'd think formula is the answer to everything and much, much better than breast milk. There's certainly a lot of undermining of breast feeding that goes on in China."

Jan Carey says the Infant Formula Council is trying to make sure its members, which represent 95 percent of the volume of infant formula exported from New Zealand, are not involved in the undermining of breast feeding.