The head of one of the world's main sustainable forestry certification programmes is in New Zealand meeting with industry groups to discuss how they can go about joining up. 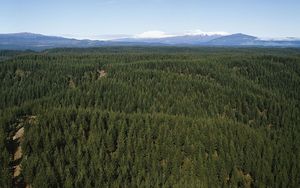 New Zealand's somewhat unique in that most forestry companies only belong to one certification system, run by the Forestry Stewardship Council.

Most countries' forestry industries also belong to the internationally recognised Programme for the Endorsement of Forest Certification (PEFC) - and some customers prefer one scheme over the other.

PEFC secretary-general Ben Gunneberg says the time is right for the forestry industry to start working towards signing up with a new industry standard to be introduced here in April.

"So at the moment they can only offer one choice but if they get the standards assessed against the PEFC benchmark then they can be certified and they can provide both. And that of course means customers who want one or the other scheme are then always able to take a first choice - New Zealand wood."

Mr Gunneberg says also that belonging to the PEFC system could pay dividends for the industry in China as it has recently introduced its own standard which is certified by the PEFC.