A survey released on Monday morning says there is a clear risk political parties will lose support this election if they introduce policies promoting economic growth that do not address the affect they have on the environment. 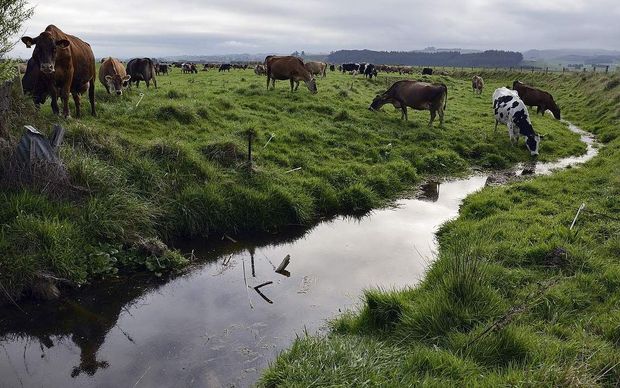 Fish & Game commissioned Horizon Research to carry out the survey, which questioned 3134 New Zealanders aged 18 plus. The survey has an overall margin of error of plus or minus 1.8 percent.

It shows 31 percent of voters believe policies such as National's plan to build large irrigation dams around the country must also protect the environment from that development.

If the plan for environment protection is not clear, they say they would be much less likely to vote for the party. That includes 12 percent of 2011 voters for each of the Labour and National parties, nearly one in five undecided voters and a quarter of adults who did not vote at the previous general election. 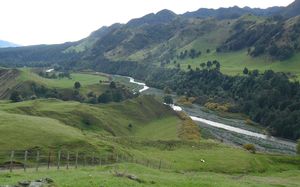 The survey shows 67 percent will agree to large-scale irrigation schemes to grow intensive dairy farming, but only provided scientific evidence proves measures are in place to ensure downstream waterways are not polluted.

The board of inquiry into the Ruataniwha dam is grappling with this very issue and has delayed reporting back by a month because of what it says is significant conflicting scientific evidence on water quality.

Respondents were asked whether they thought regional councils would have a fundamental conflict of interest by being simultaneously responsible for protecting freshwater quality and promoting large-scale irrigation for farming intensification - such as dairy farming.

A clear majority, 62 percent, agreed there was a conflict of interest; only 10 percent disagreed. 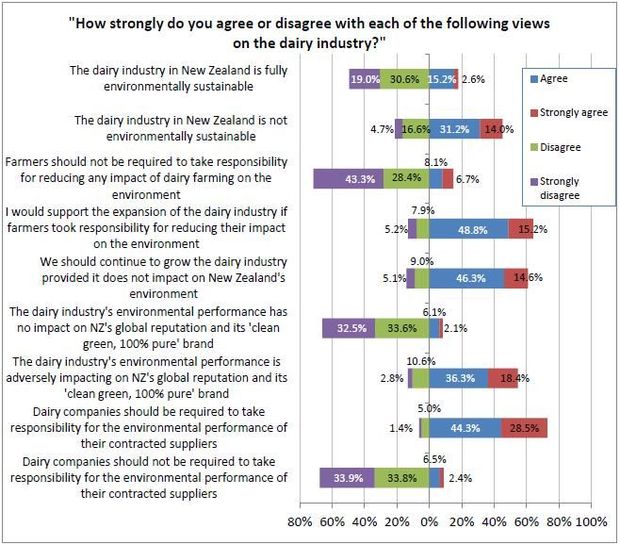 Some 90 percent of respondents agree that those who pollute waterways should be made to clean them up so they are safe for swimming, fishing and food gathering.

Among those who voted for the National Party in 2011, 88 percent believe polluters should pay to clean up waterways.

At the moment taxpayers and ratepayers pick up the bill to clean up pollution from intensive farming.

The Treasury says it does not have figures readily available on how much money is being spent, but Radio New Zealand investigations reveal that well over $500 million of taxpayer and ratepayer money has been allocated to clean up farm pollution - and that's just to clean up a handful of waterways such as Lake Taupo, Lake Rotorua and the Waikato River.

Federated Farmers has said in the past that metropolitan sewerage systems must share the blame for the pollution, but the Parliamentary Commissioner for the Environment reported recently that 95 percent of river pollution is caused by farming.

DoC should be advocate for the environment - respondents

Six of out 10 surveyed say the Department of Conservation should be the leading conservation advocate - including in judicial processes - in New Zealand.

Some 51 percent say DoC's advocacy for freshwater quality would be at risk of compromise if it got funding from industries that pollute the environment.

Respondents were asked to give their perceived rating of the water quality in streams that run through dairy farmland: 49 percent rate the quality as bad, 11 percent as good, and 23 percent as adequate.

Asked about the country's reliance on dairy, 37 percent say the economy is too heavily dependent on the industry, while 31 percent say the growth of dairy has gone too far. Only 19 percent believe the country needs to continue to grow dairy farming.

Following the trend evident in other questions, 40 percent of Act voters believe water quality is better. But National Party voters mirrored farm owners and managers, with 65 percent saying it's worse.

Respondents were given a series of statements about the dairy industry in relation to New Zealand's environment, including waterways, and asked how strongly they agreed or disagreed with them.

Slightly under half of respondents disagree (49 percent) with the statement that the dairy industry is fully environmentally sustainable and 72 percent disagree that farmers should not be required to take responsibility for reducing the environmental impacts of dairy farming.

Some 62 percent say they would support the expansion of the dairy industry if farmers took responsibility for reducing their impact on the environment.

And 66 percent disagree that the dairy industry's environmental performance has no impact on New Zealand's global reputation and its clean, green, "100% Pure" brand.