Beekeepers are struggling through one of their most challenging seasons, with cool temperatures and wind significantly slowing honey production. 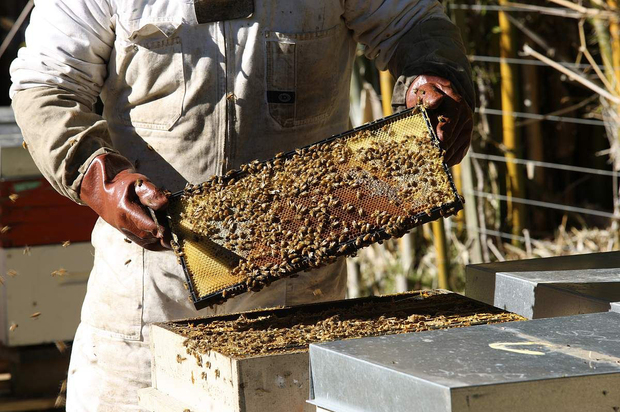 National Bee Keepers Association president Ricki Leahy said the weather so far this summer had been exactly what the bees did not thrive in.

"We have hives down the West Coast and it has certainly been a miserable summer down there, really," Mr Leahy said.

"The main problem we have with unsettled weather is the bees need to build up a momentum to get a good honey flow going.

"You also need that constant heat to get the nectar in the flowers ... so everything depends on a nice, long stretch of fine weather."

In wet weather, the bees would instead stay in the hive and eat what they had produced from a fine day. That mean beekeepers were not finding much in their hives, Mr Leahy said.

Federated Farmers Bee Industry Group chairman John Hartnell said the unseasonal weather meant the bees were loath to leave the hives to forage, and he predicted there would be at least a 40 percent drop in honey production from last year.

The domestic price of honey would rise because of what the international markets would be willing to pay to keep New Zealand honey on their shelves. However, that would not help struggling beekeepers.

"There's going to be a lot of beekeepers that probably won't break even this year," Mr Hartnell said.

"They're going to find that their costs of production probably exceeds the actual crop that they'll reap after they harvest.

"Certainly the reports are that the honey boxes are very empty and, in some instances, the beekeepers are still feeding hives that are in more of the high country areas."

The season would be tight for some producers, especially those who operated in the lower revenue-generating honey products which did not reach the "heady heights" of products such as manuka.

In Australia, the honey production outlook was equally dire but for the opposite reason; recent heatwaves and bushfires.