The Rotorua Lakes clean-up has made further progress with the announcement that the water quality of Lake Rotoiti is the best it's been in decades. 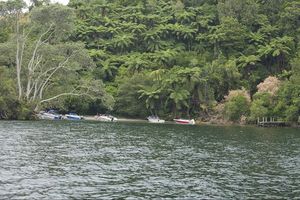 The long-term programme is aimed at restoring the lakes that have suffered years of pollution from sewage discharges and nutrient run-off from farms.

He says the main improvement for Lake Rotoiti has been a diversion wall which was put in place in 2008 and has taken the outflow from Lake Rotorua and diverted it down the Kaituna River.

Mr Bruere says this has got Lake Rotoiti to the long-term target specified in the regional water and land plan. He says the quality of the water being diverted down the Kaituna River has also improved, because treatment measures in Lake Rotorua have also been effective.

"We haven't had any algal blooms on the lake for the last two to three seasons, water clarity is severely improved. The water quality is probably the best it's been for thirty-five to forty years."

The regional council and community groups are continuing their investigation of long-term measures to reduce nutrient flows into the Rotorua lakes.