Fonterra has completed its inquiry into an October incident in which 150,000 litres of milk in 14 tankers was contaminated with suspected mining waste at its Eltham Plant in Taranaki. 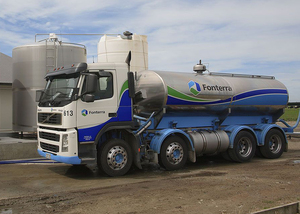 The milk was contaminated with mud and gravel and was disposed of at an Eltham waste plant.

He says a contractor had accidentally connected a trailer that was not intended to transport food products to a truck unit.

Mr Walls says as a result of the mistake all Fonterra contractors must now record both truck and trailer numbers, where as previously only the truck number was recorded.

He says the second finding was that the pipework on the Hawera site was able to be connected to a non-food grade trailer unit.

Mr Walls says Fonterra has now changed the pipes so there is no physical way that a contractor could connect to the pipes in that way and that change is being rolled out across all the Fonterra sites.

Some farmers in the area and the Taranaki Regional Council have told Radio New Zealand they believe it was waste from fracking wells that got into Fonterra's tankers.

Fonterra collects milk from Taranaki farms that spread mining waste from fracking on their land.

They say Fonterra contracted a firm to help it collect milk during the flush, that's also involved in the transport of fracking waste. Mr Walls could not confirm this.