Quad bikes are a major killer on farms on both sides of the Tasman, and farm safety experts in both Australia and New Zealand are debating the need for roll bars to be fitted to all vehicles.

Earlier this month a New Zealand coroner Brant Shortland found five quad deaths could have been prevented if bikes had roll bars.

"I still think it's an individual decision, my view is I think there is enough information that suggests that roll over bars will save life more than others," he told the ABC. 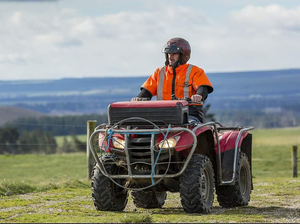 New South Wales University's Professor Raphael Grzebieta has done extensive research to inform people about the limitations of these types of vehicles.

"We will be presenting that in terms of stars on quads and stars on side-by-sides, not dissimilar, to what already occurs with road vehicles," says the professor, from the university's from the transport and road safety research unit.

"The easiest way to put it into perspective is that you would never put roll bars on a horse and the safety on a quad is rather like it's a mechanical horse".

"If the situation gets too uncomfortable, you have to get off."