AgResearch says its scientists have bred the first-ever cow to produce milk that could trigger fewer allergic reactions.

The Crown Research Institute says the cow, Daisy, has produced milk that contains no detectable levels of beta-lactoglobulin, a protein that triggers allergic reactions. 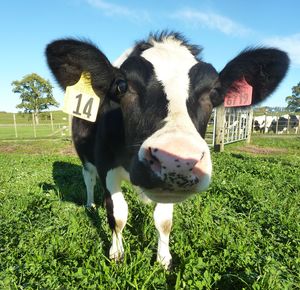 Unexpectedly, milk collected from Daisy also had more than twice the level of the casein proteins that normally occur in cow's milk, AgResearch says.

Laboratory tests are under way to confirm the milk's hypo-allergenic qualities.

AgResearch says it would be years before the milk is commercially available, even if tests go well, because using genetic engineering to produce food is not yet socially acceptable in New Zealand.

He suggests the money would be better spent examining why allergic reactions are so widespread.

Associate Professor Rohan Ameratunga, an allergy specialist who sees dozens of children a month with diagnoses of milk allergy, says the research is a breakthrough but is not the complete answer.

He says patients who have milk allergies can react to other proteins as well, so the product would probably not be useful for someone with a significant cow's milk allergy.

GE Free New Zealand president Claire Bleakley says AgResearch's experiments on genetically modified cows are inhumane and the research should be shut down.

"This animal has been born with no tail which shows there are possibly neurological and skeletal problems with the cow which may mean that when it grows up it will be deformed or it will die early."

Ms Bleakley says the research is unnecessary because processors already use technology to remove beta-lactoglobulin from dairy products such as skim milk, cheese and butter.

She says beta-lactoglobulin is an important part of the diet for milk drinkers and essential for bone muscle and tissue growth.