Bay of Plenty iwi are demanding the wrecked container ship Rena be removed from the reef off Tauranga.

The ship ran aground on Astrolabe Reef on 5 October last year, spilling containers and hundreds of tonnes of oil into the sea. 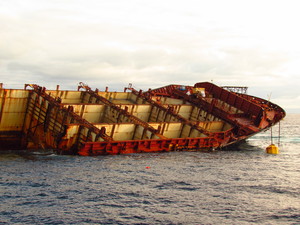 The wreck pictured in June. Photo: SMIT AND SVITZER

Under an agreement announced on Tuesday, Daina Shipping, a subsidiary of the Greek-based company Costamare, is to pay $27.6 million for costs incurred in the clean-up.

If the Daina Shipping and insurers the Swedish Club get resource consent to leave part of the wreck in place, a further $10.4 million - reflecting the reduced cost of salvage - will be paid. The Government says that money would go to community projects in Bay of Plenty.

The ship's owners have not yet said whether they will apply for resource consent.

Ngai Te Rangi chairman Charlie Tawhiao says the Government needs to make its intentions clear, and back the demands of local people who want the wreck removed.

"What we are really saying is that we want the moana restored to its pre-Rena, state which in our view means that Rena is not left on the reef."

Some are fuming about being left out of settlement negotiations with the ship's owners, and Tauranga Moana Iwi Leaders' Group chairman Te Awanui Black is asking what else has been agreed behind closed doors.

Mr Black says if iwi can be sidelined in a deal of this magnitude, anything's possible.

Tauranga mayor Stuart Crosby says insurer, the Swedish Club, has begun legal proceedings in London to set aside some $12 million to be made available to small businesses to claim compensation.

Mr Crosby says the company has assured him all justifiable claims will be paid, but he remains concerned about the time it is taking.

The firm that chartered the Rena, Mediterranean Shipping Company, announced shortly after the ship ran aground that it would donate $1 million towards the cleanup.

Mr Crosby says distribution of the money had to wait until a settlement between the Government and the ship's owner. Now this has been reached, he hopes applications can be sought and the money distributed before Christmas.

Maritime New Zealand says an independent review will look at how it handled the Rena disaster.