The captain and navigation officer of the Rena have been jailed for seven months after the container ship ran aground, shedding tonnes of oil and debris and causing widespread pollution in October last year.

Captain Mauro Balomaga, 44, and Leonil Relon, aged 37, previously pleaded guilty to charges under the Crimes Act of wilfully attempting to pervert the course of justice, the Maritime Act for operating a vessel in a way which causes unnecessary danger and the Resource Management Act for discharging harmful contaminants into a marine area. 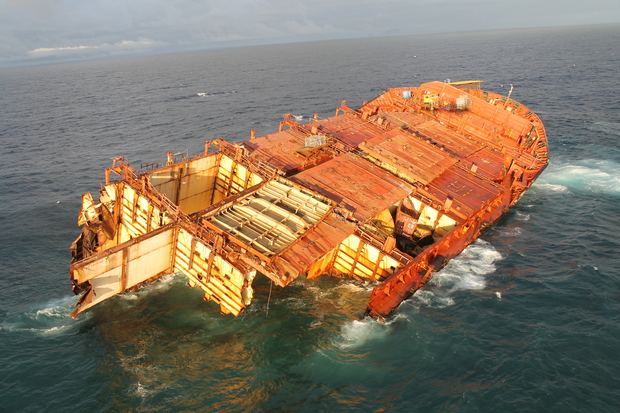 During sentencing on Friday, Judge Robert Woolf said the captain and navigation officer's attempt to defeat the course of justice had to be denounced and other people had to be deterred from committing the same or similar offence.

"I think that a clear message needs to be sent that, where there is a natural disaster such as this, that it is incumbent on those involved in it to be truthful, so that the speediest and proper solution to the problem can be found as soon as possible."

The Tauranga District Court was told that corners were cut from the agreed voyage plan to avoid the Rena from being late, but the deviation brought the ship perilously close to shallow waters before it grounded on Astrolabe Reef, off Tauranga, early on 5 October last year.

Crown prosecutor Rob Ronayne said the grounding was the result of Mauro Balomaga and Leonil Relon failing to follow reasonable standards for safe navigation and sought a starting point of two years' jail.

The Crown said the men breached fundamental principles of navigation, and that required plot fixing at regular intervals on 5 October 2011 did not happen.

The court was told Balomaga called the ship's engine room to increase revs after an intermittent echo appeared on his radar 15 minutes before the ship ran aground. The captain believed the echo that appeared on the radar directly in the Rena's path was a small vessel or a false return.

The court was told that after the grounding, Balomaga instructed Relon to plot a false position and alter the GPS log book. He also instructed Relon to destroy the original - although the navigation officer did not do this. The captain then made a further alteration to the charts to show that the Rena was planning to pass well clear of the reef.

Judge Woolf said the captain was obsessed with the need to arrive at the Port of Tauranga by 3am on 5 October, causing the train of events that led to the grounding.

He gave a starting point of two years, but made deductions for the men's guilty pleas and because they had been separated from their families and were in a foreign country.

Balomaga and Relon did not receive a sentence on charges brought under the Resource Management Act because the judge said any sentence would not be meaningful, as they were already going to jail.

"I think it has to be a deterrent to know that if you are going to put yourself in that position, and particularly cover up the facts, that that's the outcome."

It was revealed in court that the ship's insurers have been paying $US10 million a month for the clean-up.

The captain's lawyer Paul Mabey, QC, submitted that, in the days after the grounding, Mauro Balomaga was frustrated that even though he had knowledge of the Rena he was not allowed to do more to stop oil from leaking because he was no longer in charge.

Mr Mabey said his client is remorseful for what happened when the ship ran aground, but denied giving orders to cut corners in an effort to make up time.

He told the court Balomaga's attempts at a cover-up by falsifying documents after the grounding were an effort to protect the navigation officer and the captain is in despair over what happened.

Lawyer Mark Beech told the court that the charges Leonil Relon faced would probably result in an end to his career on the sea and have significant financial implications for his family.

The defence lawyers had sought a sentence of home detention.