About 50 people braved wet weather to get a free meal and someone to talk to at Love Soup's weekly summer dinner at Tokoroa's Lake Moana Nui.

Love Soup is the brainchild of local Julie King. 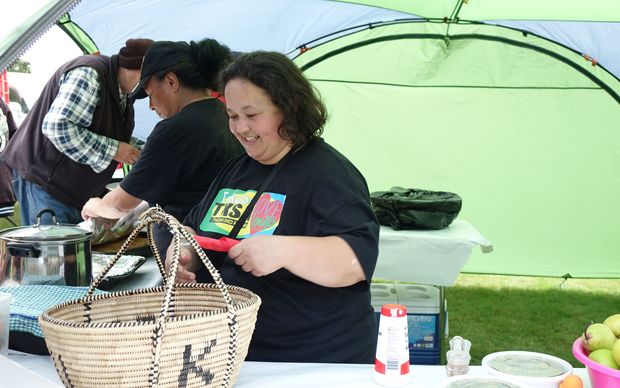 She had a dream as a teenager of winning Lotto and setting up a soup kitchen and bringing the community together.

Alas, the win did not happen, but the drive to help her fellow citizens who may be a little down on their luck still burned, and from it came Love Soup.

Ms King - who has lived in Tokoroa for more than 12 years - said it was not just about feeding people, but also improving social interaction and the town's community spirit.

She founded Love Soup in 2013 and started providing food six nights a week from a local building, but last year they lost the use of the venue and had to resort to providing food outdoors.

Ms King said she hoped Love Soup and its team of volunteer helpers could move back indoors in the next few months. 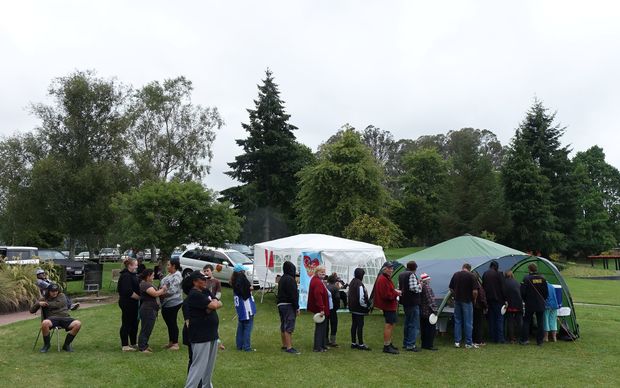 The queue for a meal at Love Soup Photo: RNZ / Andrew McRae

The numbers attending range between 40 and 100 but just prior to Christmas about 200 people turned up.

Ms King said the weather played a factor in the turnout for the outdoor event but they were always prepared and a lot of work went into food preparation.

Much of the food is donated.

Tokoroa is the largest town in South Waikato with a population of about 13,000. In its heyday in the 70's it reached 20,000, but declined in the eighties with the downsizing of the Kinleith Pulp and Paper Mill.

Nearly 500 people work at the mill and it also provides employment for a number of sub contractors, but it is a shadow of its former self when in 1969 it employed 4000 workers.