Police are investigating an attack on two white swans that were shot at up to six times in the middle of the night on a private property in Canterbury. 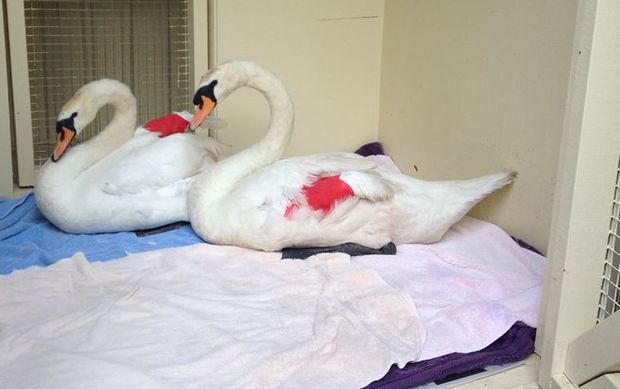 Samantha, left, and Samuel with their bandaged wings. Photo: Supplied

There is a $1000 reward to find out who shot the swans, Samantha and Samuel, early on Wednesday morning.

Samantha had lived at the Swan Lake Gardens for more than 28 years.

Gardens owner Duncan Laing said he was woken up by what he thought were fireworks before he saw a man run away.

"We saw a startled offender who was dressed in a camouflaged-type suit running for his life from the property, he looked like a startled rabbit," he said.

"[He] obviously decided that he was going to endeavor to end their lives. Of course he wasn't quite smart enough to be able to achieve that."

Duncan Laing found the bloodied birds in the morning and called the SPCA.

It took them more than two hours to get the pair off the lake, where they were swimming frantically around in extreme distress.

Samantha's wing was shot at multiple times, while a bone in Samuel's wing was completely shattered. A bullet fragment was also found lodged in his head.

Both swans are recovering at the South Island Wildlife Hospital in Christchurch.

A volunteer there, Angela Tranter, said their biggest worry now was a possible infection which could lead to Samuel losing his wing.

"We're obviously working very hard to make sure that doesn't happen," she said.

"We normally have two volunteers on each shift and we're working with about four each shift now."

She said all the staff were shocked at what happened. 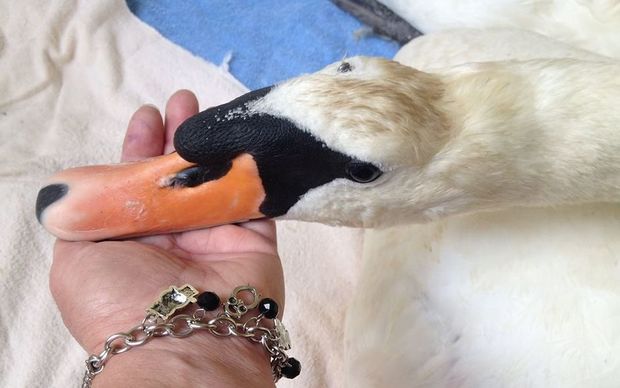 They are now asking people to donate old towels for the swans, and a give-a-little page has also been set up to raise money for them.

Society for the Prevention of Cruelty to Animals Canterbury chief executive Barry Helem said the attack was hard to comprehend.

"It's just really quite senseless and brainless and I have no clue why anyone would go out and shoot these beautiful birds," he said.

Canterbury police were assessing the gun casings found at the scene.

Inspector Paul Fremaux said they wanted to hear from anyone who saw a man in camouflage clothing in the Cashmere area on the night of the attack.

He said anyone saw someone on their property acting suspiciously should call 111.