A tramper who was stuck on the side of a mountain on the West Coast for two days with a dislocated shoulder, and then crawled for ten hours for help says it only takes a spilt second to be in a life-or-death situation. 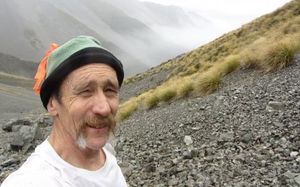 Greg Ross, 63, who grew up in New Zealand but now lives in Canada was tramping near Hokitika when he fell and dislocated his shoulder last Monday.

Mr Ross who has tramped and worked in the New Zealand bush for 50 years said he was confused and slipped on a mountain side.

"I hadn't been on that track for 31 years, the terrain had changed so much that I wasn't sure where I was."

He said when he was falling his wrist got caught on a tree stump which pulled his right arm out of its socket.

"I was in shock but I managed to get into my sleeping bag and take some pain killers."

Mr Ross spent two days on the side of the mountain before deciding to try and make it to a nearby hut.

"I knew the Frisco Hut was close, so I made the decision to abandon all my gear and try and crawl there."

After 10 hours of crawling he made it to the hut where he stayed until he was rescued this morning.

"When I first saw the hut it was utter relief but when I got there all I had was water and two foam mattresses to keep me warm."

Mr Ross told a friend to expect him out of the bush on 20 April, but when he failed to return yesterday the police were called.

"He left clear intentions as well as a due out date and a panic date which enabled searches to locate him quickly."

Mr Ross said the ordeal has not put him off tramping, but he would carry a locator beacon from now on.

"It goes to show that even people with all the experience in the world can end up in a life or death situation in a split second."