The Tertiary Education Union says Otago University's sponsorship of a Super Rugby team is a gimmick that is bad for education. 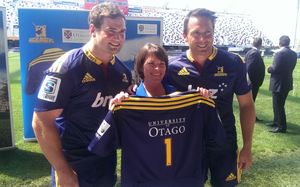 The university has signed a two-year sponsorship deal with the Highlanders' franchise for television and brand exposure.

"We see the role of the University of Otago and of all public education institutions in New Zealand to be about providing quality public education and research, not about funding private sports teams."

Ms Cormack said the sponsorship appears to be a trick to get more exposure, but the university already has a strong brand built on quality teaching and research.

Otago University vice-chancellor Harlene Hayne said the university is a business, and like any business marketing is a core activity.

"There's absolutely no way that we could ever develop a sponsorship deal that absolutely everyone would agree with. But it's my job as the vice-chancellor and the CEO of this business to make the best decision I possibly can about value for money and exposure, and I'm pretty convinced this is a really good decision."

There is some precedent for the arrangement, with the University of Canberra sponsoring the Brumbies, and more locally Otago Polytechnic sponsoring the local cricket team, the Otago Volts.

And the sponsorship deal is being welcomed by others in Dunedin.

The deal is being seen as a shot in the arm for a rugby team which came second to bottom last year and needs to rebuild, and as a public act of support for the city's covered stadium, which opened in 2011 but has become a financial millstone for the city council.

Mayor Dave Cull said the university has always seen the stadium as a great asset, and now it is supporting one of the facility's main users. He said the deal would quell rumours the Highlanders might be attracted elsewhere and he is confident they will lift their game.

Otago University Students' Association president Ruby Sycamore-Smith said the university is right to get in behind the New Zealand culture.