A Dunedin architect says the design of a proposed luxury waterfront hotel could make it the best in New Zealand.

Developer Betterways Advisory was giving a second day of evidence as it seeks resource consents for the controversial 28-storey hotel and apartment building at Steamer Basin.

A director of the architectural firm Mason and Wales, Francis Whitaker, told the hearing the narrow, glass-sided building is an outstanding design that would build on Dunedin's reputation for both heritage preservation and leading edge design. 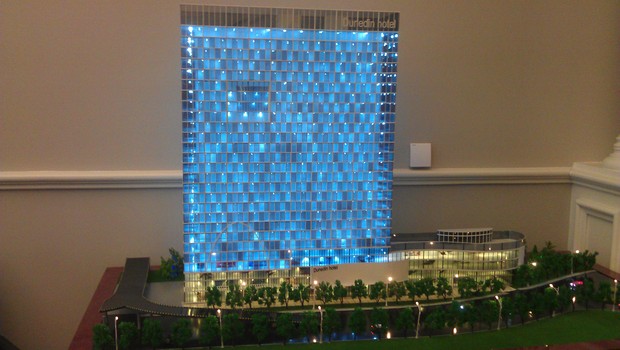 A model of the planned hotel in the hearing room. Photo: RNZ

Mr Whitaker says London has shown that the public can quickly embrace a well-designed glass object in a historic city.

He says the only risk is that the design gets changed before the hotel gets built, and the city needs to hold the developer to the high quality plans it has presented.

Several hearing commissioners and council experts challenged how the developer could promote the idea that hotel patrons would use restaurants on the waterfront, when they were effectively barred from it by a four-lane highway.

Christchurch-based transportation consultant Andy Carr said the road in front is curved, is in a 60 km/h speed zone and in peak periods would be difficult for pedestrians to cross safely.

Mr Carr says traffic lights could be put in nearby, or ideally a new pedestrian bridge could be built to make the waterfront accessible.