The Independent Police Conduct Authority (IPCA) is getting a $3.5 million boost for its inquiry into the protest and 23-day occupation at Parliament grounds. 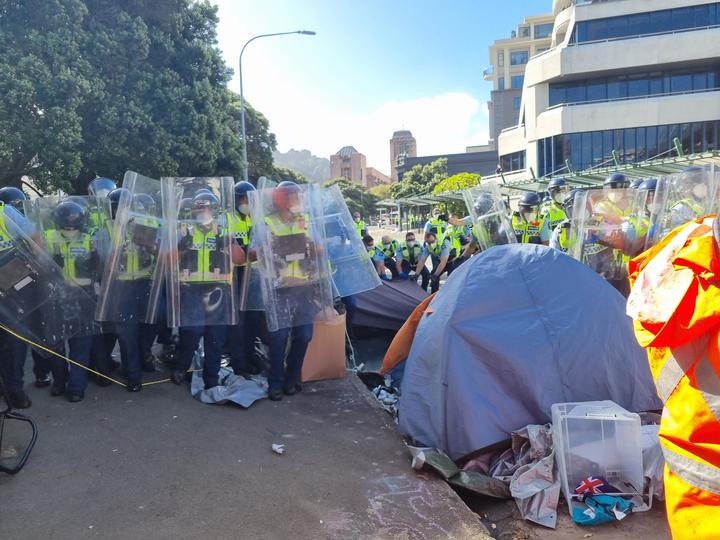 Police moved to the bottom of Molesworth Street, where protesters were hurling cones and tables at them, 2 March 2022. Photo: RNZ

The police watchdog received nearly 1900 complaints about the police response to the three-week occupation of Parliament's lawn and nearby streets.

The protest caused major disruption to the capital and was eventually broken up by more than 600 officers using riot gear, pepper spray and fire hoses, forcing the protesters off the precinct.

It has been revealed that Cabinet approved additional funding for the IPCA on 11 April.

National Party justice spokesperson Paul Goldsmith said the funding for the IPCA was a significant amount but the inquiry would focus on the actions of police and that was only "half the job".

"What's left unanswered is the role of the other players, particularly the Speaker - who infamously put the sprinklers on and had loud hailers shouting across, really winding things up - what role government ministers played, the security around Parliament, how that was handled," he said.

"There's a whole lot of other issues that the government refuses to look at or acknowledge or have investigated properly."

Goldsmith said the IPCA annual budget was about $5.7m, so the extra $3.5m showed the scale of the incident.

He wanted to see a series of inquries, including a ministerial inquiry, looking at the role of ministers, parliamentary security, and the Speaker of the House.

Prime Minister Jacinda Ardern has said the government will look at the IPCA terms of reference, before making a judgment about whether there would still be any gaps.

The IPCA review would canvas what intelligence police had access to and used before and during the protest, and would also examine police planning, staff selection, and the tactics used.