Prime Minister Jacinda Ardern has announced a pilot that will allow those travelling overseas for business to forgo MIQ and isolate at home will be open for expressions of interest on Thursday.

You can watch the PM's announcement here:

Speaking to media this afternoon, Ardern said Cabinet made further decisions on what would be a staged approach to ease border settings, including the self-isolation trial, which will be an alternative to MIQ.

She says the self-isolation pilot will be capped at 150 people and will focus on businesses and employees required to travel internationally for work purposes.

Ardern says there will be a small number of government officials in the trial, but the vast majority will be from the private sector.

She says those taking part must be New Zealand residents.

Those applying will need to arrive in New Zealand between 30 October and 8 December, with final travellers leaving isolation by 22 December, she says.

It will be combined with a monitoring and testing regime.

"It is not our intention that self-isolation be only available to business travellers in the future. This narrow scope now, though, is for us to kick off safely while we begin the design work."

Expressions of interest open on Thursday and will remain open until 9 October, she says.

Ardern says further down the track it may not be necessary for everyone to isolate for the full 14 days.

Covid-19 Response Minister Chris Hipkins says smartphone technology is being considered as a way of tracking people's movements when they are in self-isolation.

"Smartphone technology is probably the less threatening of that compared to other options like an ankle bracelet or something, but a smartphone that has GPS enabled might also have some form of facial recognition so you can be sure the person who is carrying the phone is the person who is supposed to be. Those are the technology options we'll work through." 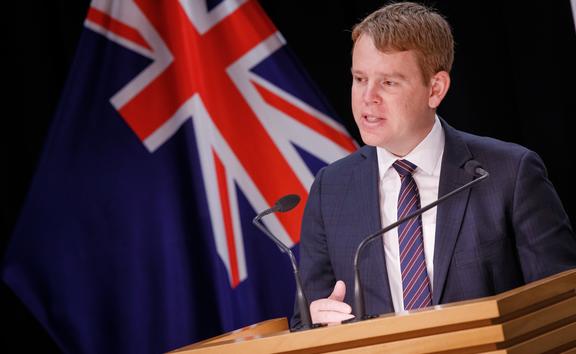 Officials would be looking at insights gained during the trial - not after - and making decisions as the trial unfolds, he said.

When people return to New Zealand they will be required to self-isolate at premises where no one else lives, and there is no shared ventilation, such as might be the case in an apartment.

Speaking to Checkpoint, Hipkins said a completely self-contained unit attached to a home where others lived could be considered in the future as long as the person isolating had no contact with those in the main dwelling and they did not share any "air space".

Checkpoint host Lisa Owen put to him the criteria meant only wealthy individuals would qualify.

"It starts small, it starts quite narrow and quite restrictive, but of course over time higher rates of vaccination means we can expand those settings more and more as more people are vaccinated and as we find it's safer and safer to do that," Hipkins said.

"So yes, it is starting small because at this point we're still in a very low risk environment, have a very low appetite for risk..."

He hoped the arrangement could be put in place for more people in the first quarter of 2022.

Hipkins will give more details about the pilot programme later in the week.

Listen to Chris Hipkins on Checkpoint.

Ardern has also announced quarantine-free travel can begin for RSE workers from 4 October for Vanuatu and 12 October for Samoa and Tonga.

They must have at least one vaccination and have their doses completed in New Zealand if they have not already done so.

They must remain in isolation on site at their workplaces until day five, and will be tested on day zero and day five.

Director-General of Health Dr Ashley Bloomfield says progress is being made in containing the virus in Auckland.

There were 12 new cases of Covid-19 in the community announced earlier today.

He says the seven-day rolling average of cases has dropped to 15 this week, compared with 17 last week and 19 the week before.

"We are making progress. Many of our clusters are now considered to be contained ... or clusters are dormant, that is they have not given rise to any new cases in the last 14 days."

Bloomfield says there are now just four active subclusters and that public health authorities have honed in on suburbs they know there's transmission in.

People seemed willing to be tested when offered, he added.

"There was certainly work done in Clover Park last week, complementary to the wider testing that was happening there. I know another team's gone out into another suburb today, to test some streets where there have been some cases located."

Bloomfield says somewhere between 45 and 50 more cases can be expected just from the cases those existing subclusters, but the average number of cases is still coming down even with these subclusters.

He says the outbreak has resulted in relatively low hospitalisation, partly due to the high proportion of young people involved, but "Covid-19 is not a trivial disease".

"The message is clear, it is a mission critical to achieve high vaccination rates. We've made a good start, but let's see it through."

Ardern confirmed about 43 percent of the eligible population were now fully vaccinated.

She says businesses are doing new and innovative things to encourage people to get vaccinated and the government supports that.

The government is actively considering vaccine certificates and decisions on that will be made well ahead of summer festivals, she says.

"This is a way that we can give you safety and security to attend an event knowing that those around you are that bit safer because of the vaccine and also more likely to see that event go ahead without disruption. I see that as an incentive," Ardern says.

Ardern's briefing comes as Aucklanders are heading into a critical week with health experts warning the Covid-19 outbreak could go either way.