The NZDF will not be required to land in Kabul itself but will be providing airlift support in and around Afghanistan, the Defence Minister says. 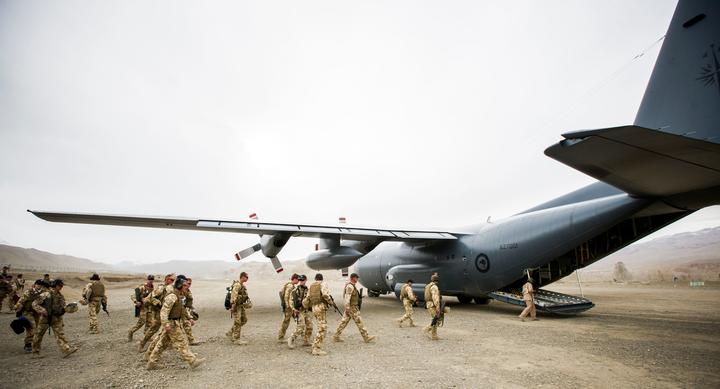 New Zealand's military deployment to get people out of Afghanistan will be a difficult and delicate mission if the reports coming out of Kabul airport are anything to go by.

Prime Minister Jacinda Ardern has committed to work closely with the Australian Defence Force in the mission to evacuate 53 New Zealanders along with 37 Afghan nationals - plus their immediate family - who've previously assisted our forces.

A Hercules aircraft will depart as early as tomorrow morning with about 40 military personnel on board.

Australia is sending three planes and more than 250 personnel but has expressed concern about the difficulty of landing aircraft at Kabul's Hamid Karzai Airport - where chaotic scenes have been playing out as thousands of Afghans try to flee the country.

The Australian foreign minister Marise Payne, told Sky News Australia the circumstances in Kabul mean the operation will be challenging.

"We're very very focused on working with the international community particularly with the United States who are assisting principally with security leads, the challenge of course is making sure that that is the circumstance that applies in Kabul and so that is the expectation the United States have made very clear to the Taliban that will be a conditioned precedent to enabling both military and commercial flights to leave with those sorts of people on them," Payne said.

National's foreign affairs spokesperson Gerry Brownlee said the operation is the right thing to do but there are still many uncertainties.

"I'm sure that there's great concern about how safe the airport would be and whether or not in fact the planes would be able to safely land," Brownlee said.

"As we work through the logistics of the deployment of our people, of course it becomes clearer what our role will be.

"What I understand from the Chief of Defence is as we go over and be part of a multi-national evacuation effort it would likely mean that we will not be going into Afghanistan, our people won't be but we will be helping to serve in a third country where a lot of those who are being evacuated will be processed.

"As the Prime Minister said if we send an asset up it really is just part of a pool of assets from multi-nationals to try and coordinate what is obviously a rather chaotic scene out of Afghanistan at the moment. As we're locking in those logistics and talking with our Australian counterparts it will become clearer throughout this day exactly where we will be heading."

The NZDF will not be required to land in Kabul itself but will be providing airlift support in and around Afghanistan, Henare said.

"What we're being told is that there is lots of airlift support there in Kabul itself and as we've seen the reports on TV that the United States are already in there, we understand that the UK are too but what we do know is that there will need to be a support network of air uplift in and around Afghanistan as they're looking to bring evacuees out so look we will continue to work with our partners to ensure that we play the supporting role that we intend to play."

He said Australia will play a part in the operation to bring back New Zealand citizens and Afghan nationals.

"They will be part of that effort, we made it clear that even our Hercules that we send over might not just be carrying New Zealand citizens or Afghan nationals but it will just be playing part of a large network of aircraft that will be doing this work," he said.

Henare said the Defence Force have identified at least 53 New Zealand citizens and associates on a list of evacuees that has been shared with New Zealand's international partners.

"Through our consulate services we have made contact with at least as of last night 53 of our New Zealand citizens and associates as well as we've been in pretty close contact with almost all of those 37 who were identified who were directly employed by the Defence Force."

The Defence Force Hercules aircraft will be able to leave at the earliest on Wednesday morning.

Henare said the expectation is that evacuees will be brought back to New Zealand and processed through MIQ quarantine as soon as possible however he said they will not be put through MIQ all at once.

"It won't be one big wave is what I've been advised, it will be a number of intakes coming into the country over a number of weeks."