Iwi and Māori business' have called on the government to invest more in rangatahi Māori employment and training initiatives, which have seen thousands join the workforce. 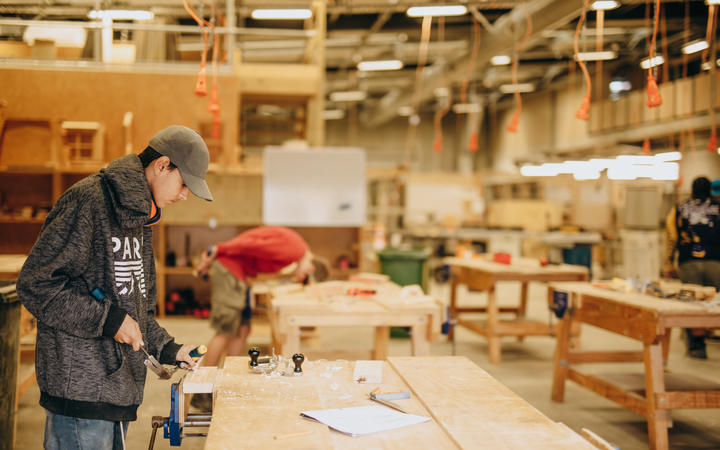 The government has pumped $200m into Māori employment initiatives in the last year, and lifting Māori incomes and skills is one of the priorities for Budget 2021.

It was a challenge getting rangatahi into work, BDO consultant for iwi and Māori business' in Tairāwhiti Khylee Potae said, but funding for Māori trades training was making a difference.

"I see a real positive energy for Māori in being able to get in and get really good skills on the job."

"Those business owners know they're taking a hit on their business from being efficient and productive because they're having to take a step back in a tuakana-teina model - to put their hand out to pull someone up - but equally the feedback is really positive around the kids and around their learning and how they're advancing."

She said business' were willing to weather the losses of taking on young Māori recruits in order to build up the workforce, but more financial support was needed from the government.

He Poutama Rangatahi aims to get those aged 15 - 24 into employment, education or training, with 5752 rangatahi enrolling in the programme to date, the majority (81 percent) of whom are Māori.

Over 40 percent of them have found work or on-the-job training as a result.

Te Rūnanga o Ngāti Toa general manager of employment and education Bianca Elkington said 17 of the the 20 young people who'd completed the six-month programme had gone on to work.

"We were quite deliberate in our approach to not just put rangatahi into a job, we wanted to see 'what is it you want to do', then we'll work to try and get you on to that pathway.

"Now if it means that you're in a job just for now, until we're figuring out the next step, until you're gaining enough skills and even qualifications to move into that space, then that's kei te pai (all good) too".

She said they continued to support rangatahi even after they'd completed the six month programme.

"We're still there, we get to know the employer because we want to make sure they're looking after our kids and that along their journey of employment or education or training that they can continue to come back and say 'help, I'm stuck, the wheels are falling off' or 'hey, look at me I've just finished this certificate'".

Elkington said it was a no-brainer for the government to put more money into He Poutama Rangatahi.

"You have these great outcomes but actually, imagine - this was 20 kids that we were able to do, they were placed within five months - imagine if we had more and we had the ability, not only the capability but the capacity, to do more".

Other youth employment programmes that have supported Māori into work include The Māori Trades Training scheme which has seen 42 people gain apprenticeships in the construction industry and with utility services like gas and water.'

Mana in Mahi has also placed 1137 Māori in work, mainly in construction roles.

"We have been receiving a lot more requests in terms of trying to be innovative about those employment options, so we're seeing people who are trying to set up new business' - they may have been employed previously in tourism or hospitality - and they're trying to create new opportunities".

"They've had to take stock of previous employment and look creatively for the future, so we would hope that Budget 2021 rewards them for their initiative and starts planning for future growth," she said.

She's also worried about another increase - emergency grants for essentials like food, power and firewood have soared since March from 1400 to 3291.

"So what we're seeing is this rapidly increasing desperation, and it was interesting when the Child and Youth Wellbeing Strategy report came out last week where it talked about tamariki Māori having significantly lower material well-being and higher material hardship in the overall child population because our figures are certainly showing that".

She said "structural unemployment" continued to be a major issue for whānau Māori.

The three Whānau Ora Commissioning Agencies received $72 million between them to help respond to the pandemic on top of their baseline funding of $88m.

They still have another $41m in the bank for this financial year.