New Zealand will not be throwing open its doors to the large numbers of new migrants seen in recent years, once it is ready to reopen the border. 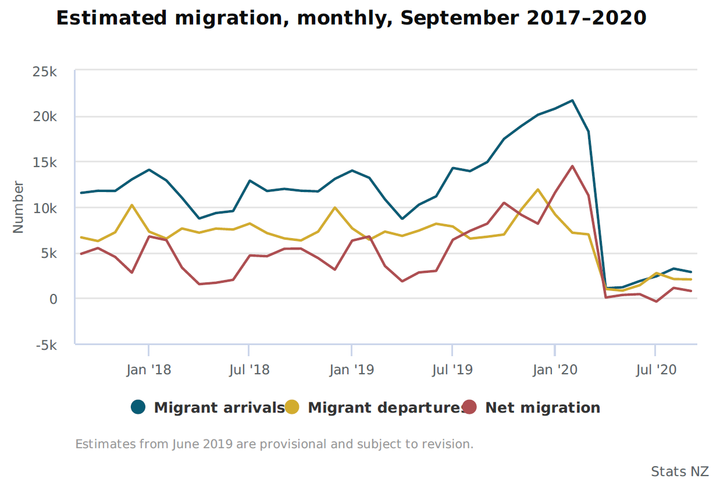 Covid-19 has brought net migration to a screeching halt, although tens of thousands of New Zealanders have returned, or become stuck here because of the pandemic.

The strong signal is while the government will use migration to fill skills gaps, businesses should get used to the idea of using the labour force already available.

At the start of 2020 there were still tens of thousands of people arriving. Then there was a big rush from people overseas to get home but more recently arrivals have slowed considerably. For the first time in a long time the number of New Zealanders who have arrived here outstripped the number of those who left.

Take the six months last year between April and September when net migration was about 2500 - in any other year that would usually be about 20,000.

"An absolute catastrophic collapse," is how Infometrics senior economic Brad Olsen describes it.

It spiked - possibly as high as 95,000 in the year to March 2020 - which Olsen says includes "all of those visitors and others who came into New Zealand before we closed the borders, who we expected to leave, weren't able to leave, they were stuck in New Zealand".

There should be a "strategy for what sort of skilled workers we need to bring in and what that general profile for New Zealand's migration and population settings are," he says.

"So that we can properly resource the rest of the country, so we have the hospitals in the right places, so that we have houses for people to move into without everyone having to sell a kidney to get onto the housing ladder." 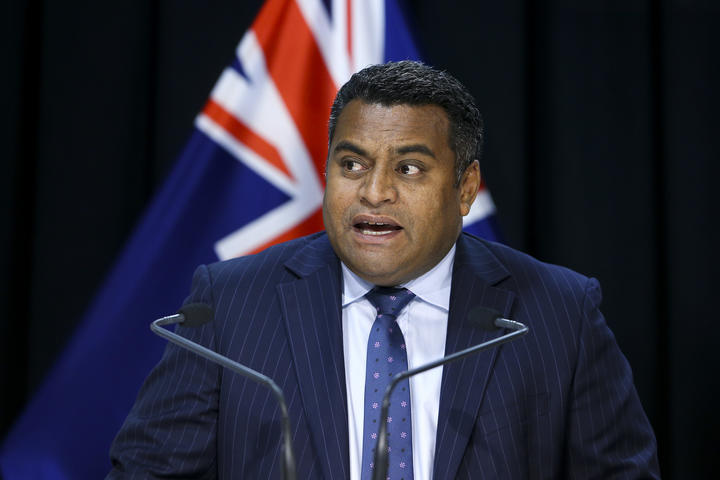 Kris Faafoi says the government has made it a priority to upskill New Zealanders. Photo: 2020 Getty Images

Immigration Minister Kris Faafoi is telling those who have relied on migrant workers in the past to "think differently about how to do that in the future".

The government had "made it a priority to put resources into upskilling New Zealanders," he says, "and we'd prefer that if we're going to do that, obviously, the jobs that we've relied on with migrant labour in the past would be able to be filled by New Zealanders".

However, he's not willing to talk numbers.

"I think everyone's going to default to numbers first, but for us it is about the kind of economy that we might have in the future, the kinds of jobs that we want New Zealanders to have ... the kind of training we want to have available," Faafoi says.

National's Judith Collins doubts there is a public appetite for immigration numbers to sky rocket once the border reopens.

The government should "think very carefully before they start reinstating the same sorts of numbers that they had before," she says, "but at the same time, understanding that there are some industries and businesses where they have become very reliant on immigrant labour".

Industries like horticulture "just want people who are, one, willing to work, secondly, able to work and thirdly in the right place to work," Collins says.

"And when people say 'Oh you know, they should pay more' and all this, it's actually just costing them losing fruit and losing everything else.

"It also means that people need to understand that if they can't get staff to do the jobs," she says, "they'll either need to automate, or they will simply downscale and that's what will happen".

Green's immigration spokesperson, MP Ricardo Menéndez March wants to see a fairer system, that is "equitable and that people have access to a fair processing times for their visas".

He says the system's been moving to restrict numbers by delaying applications and furthermore, should not discriminate against people based on things like income and skill level.

Faafoi has flagged a review of New Zealand's largest residence programme, the skilled migrant category, including making sure agencies are "working with employers who identify specific skill shortages and having them in the new system, be the ones that apply for visas and not the other way around".

That change would "come in later this year," he says. There had been what he called "a rump of applications at the lower end of the points scale" which would be part of the review.

New Zealand's Refugee Quota Programme has started up again, but in much smaller numbers. It had been on hold since March last year, with exceptions made only for a small number of priority emergency cases.

Faafoi says while "everyone would like everything to go back to normal" as fast as possible, accepting refugees at the moment was a "purely a capacity issue". Being able to bring about 200 people by the middle of the year was a "good start," he says, "but obviously is not the 1500 in a year that the government is committed to".

New Zealand's "ability to bring more in is really controlled by what we're able to do with the UN [United Nations] and getting people through their system, and the capacity to get more people through managed isolation, Faafoi says.

"And we've got to be mindful of New Zealanders and the capacity at MIQ as well."

Judith Collins says it is "simply unsustainable to continue to bring in refugees in the numbers we have, and we've still got New Zealanders having to be isolated, and quarantine, and we don't have enough places for New Zealanders to come home".

She would not be "rushing to go up to the target or the limit" and would be "very careful about making sure that New Zealanders got home first". Once the border opens, New Zealand should "stick to the same numbers" it previously had but still proceed with caution, Collins says.

Faafoi says he does not have a "crystal ball" for when the programme will resume fully, but says it would "take some time to get back up to 1500".