National leader Judith Collins is calling for New Zealand to deport an Australian woman who's refusing to take a Covid-19 test in managed isolation. 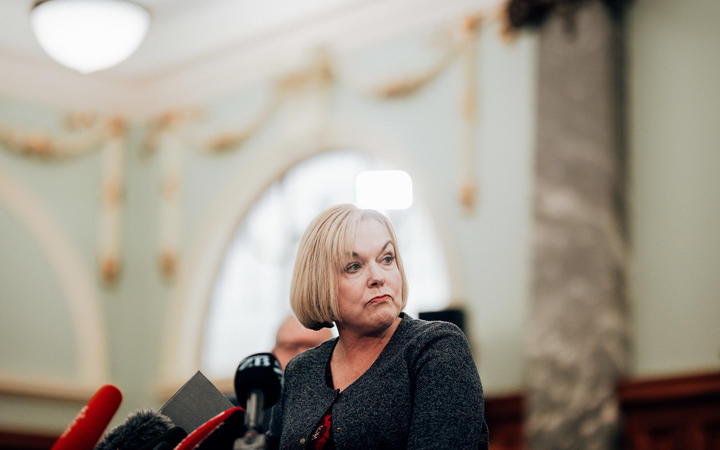 Lucinda Baulch is due to be released from Wellington's Grand Mercure hotel today after spending 28 days in the facility - the maximum length of time a person can be held.

The woman, who is a vet nurse, flew to the country almost a month ago to deliver three children to their caregivers in Aotearoa.

She wants to be able to return to Australia without first being tested for the virus, arguing she has not been provided with evidence of its safety and effectiveness.

Speaking at Parliament, Collins said it was time for the government to drop its soft approach.

"If a New Zealander went to Australia and refused to get tested in an MIQ facility, what do you think would happen to them?" Collins said.

"They'd be back on a plane to New Zealand."

Collins said, unless the woman held New Zealand citizenship, the Australian government needed to take "their own person" back.

"We shouldn't put up with this behaviour from anybody."

Under the quarantine-free travel arrangement with Australia, people departing New Zealand must first provide evidence of a negative Covid-19 test.

Covid-19 Response Minister said there were no plans "at this point" to deport the woman.

Hipkins said people were "entitled" to refuse a test, but it meant they would end up with "a much longer stay in managed isolation than they necessarily need to".

If she got a "clean bill of health" she would be free to leave after her 28 days, he said.

When asked why New Zealand would not deport someone refusing to comply with the requrirements of entry, Hipkins said while "ultimately people have a right to refuse testing", the "vast majority" of people coming through MIQ have been willing to be tested.

At the moment he was not "proposing to take any further action" against the woman from Australia.

Hipkins said he would provide further information about whether she, or the taxpayer, was footing the bill for the extended stay in Wellington's Grand Mercure.

ACT agrees with National, saying the woman should be deported.

Leader Davis Seymour says there are "conditions for entering New Zealand, she's failed to meet the conditions, ergo she should be sent home - that's what the Australians would do to us".

The government's Quarantine Order stipulates that a person can be held in an isolation facility for a maximum of 28 days, if they are asymptomatic and have remained in a bubble of one.