Speaking after a Cabinet meeting today, Ardern said both GNS Science and the National Emergency Management Agency (Nema) had today acknowledged they were among those charged over the Whakaari / White Island eruption.

Workplace safety regulator WorkSafe announced this afternoon that it had laid criminal charges against 10 organisations and three directors over the Whakaari / White Island eruption which happened nearly a year ago, which killed 22 people.

The organisations each face a maximum fine of $1.5 million, and the individuals face fines up to $300,000.

Worksafe said it would not be releasing the investigation report, because the matter was now before the courts. It also did not name the parties it was charging.

Ardern said the Nema and GNS agencies would not be seeking name suppression, which is why they had named themselves.

She said it was an "independent decision" for WorkSafe to lay charges.

"We need to leave it at that. We need this to be an independent process people can have trust, confidence and faith in."

"I'm very aware that are we not only coming up to the anniversary of this horrific tragedy, we are also coming up against the deadline for which charges, if they were going to be laid, would need to be laid.

"I know at this time all of New Zealanders' thoughts are with the families of those who experienced loss or injury and there is no easy process from here, but it is the job of WorkSafe to make sure if there are questions that need to be answered that they play a role in leading the charge in that."

Wood said the Ministry of Business, Innovation and Employment (MBIE) was responsible for providing advice on whether WorkSafe was properly carrying out its functions.

He said he had written to MBIE today asking for officials to provide him with advice so he could be assured WorkSafe was carrying out its function satisfactorily. 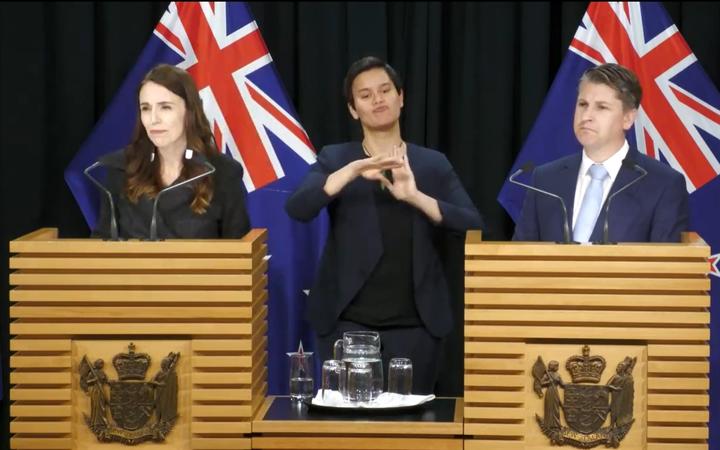 Asked about a travel bubble with Australia, Ardern said one of the concerns New Zealand had was that Australia had a higher tolerance for community cases than New Zealand did.

She said Australia had indicated it would not shut down inter-regional travel until there were 30 cases in one state.

"We don't want to yo-yo in and out of travel with Australian states, we of course have a greater interest in clarifying those borders, it matters less to them because they've opened one way with New Zealand, so those parameters are things we're still trying to work through with Australia."

Ardern said she needed clarity on how Australia would close down borders if there was an outbreak, in such a way where New Zealand could continue a bubble with individual states.

Ardern said the government had been quick to implement its manifesto, and was planning to progress its legislation to extend paid sick leave this week.

"Covid has reminded us that we have obligations to others to stay home and get better ... rather than return to work," she said.

She said there was evidence extra sick leave was better for productivity, and an extension to 10 days would be particularly good for parents and families, and specifically to ensure people did not spread illnesses at work.

She said compared to Australia "we come short" on sick leave entitlements.

"The last thing we want is people coming to work when they are sick because they can't afford to stay home. I don't think that's good for anyone."

Wood said extending the entitlement to 10 days would bring New Zealand in line with Australia and Finland.

Five days a year is too low for many people, especially those with children, he said.

"This measure will also help employers. Businesses benefit when sick staff members stay home. It cuts the chance of bugs being spread between workers, who then need to take time off as well. We do need to move past the tough-it-out culture that risks infecting others at work."

Responding to the Child Poverty Action Group's stocktake of progress on the Welfare Expert Advisory Group's (WEAG) 42 key recommendations, Ardern said the government had made "significant progress" on income inadequacy.

The government had focused on increasing benefits and introducing the Winter Energy payment, she said.

"Some of those things have not been taken into account by the Child Poverty Action Group's report and the report itself doesn't acknowledge the progress that has been made there. Would I agree there's more to do - yes - but, we actually gave ourselves a timeframe to recommend some significant recommendations that were over a three to five year period and we're continuing to do that work."

The Independent Police Conduct Authority has today decided to reject a complaint from the families of people killed in the CTV building during the 22 February 2011 Canterbury earthquake about the police investigation in to the building's collapse.

Ardern said she wanted to look at the letter and make sure the government replied to it.

"I absolutely understand that the families involved here, in a similar way to the families of Pike River, feel that justice has not been done."

She said she would reply, but did not want to raise expectations.