The Prime Minister says she voted "yes" in the referendums on voluntary euthanasia and the legalisation of recreational cannabis. 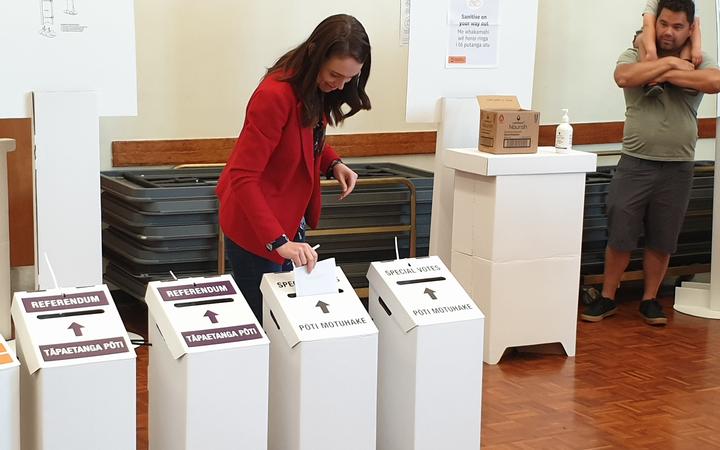 In a statement, a spokesperson says Jacinda Ardern has committed to progressing any legislation "in line with the will of the people following the release of the final results next week".

Preliminary results show in the euthanasia referendum New Zealanders have voted in 65.2 percent in support of the End of Life Choice Bill and 33.8 percent have voted against.

In the cannabis referendum 53.1 voted against it, while 46.1 voted in favour.

Ardern had refused to say how she voted in the cannabis referendum ahead of today's results.

In provisional results, 53.1 percent voted against draft legislation making it legal for those 20 and over to buy and use cannabis, and setting up a licensing and regulatory regime.

The assisted dying referendum is binding so once the final result is released on 6 November, it becomes law and will come into force in 12 months later.

The Greens say a close result on cannabis means the public will not know the final result until next Friday.

Drug Law Reform spokesperson Chlöe Swarbrick says it will come down to voter turnout, and due to the record numbers of special votes, she remains optimistic.

But National's drug reform spokesperson Nick Smith disagreed, describing it as a clear cut result "that would be incredibly unlikely to be turned over on the special votes".

He said the vote was "a victory for common sense".

"That's good news for our country," Smith said, "ensuring it would be healthier, that it's safer, more successful from this rejection."

The referendum should not be taken as endorsing the status quo, says Smith, but a "rejection of legalisation and increased access".

When asked if Natonal would support decriminalisation, Smith said it would not support any move that would make cannabis more readily available.