The Restaurant Association wants the country to adopt a scheme similar to the UK, which would see the government subsidise meals at eateries. 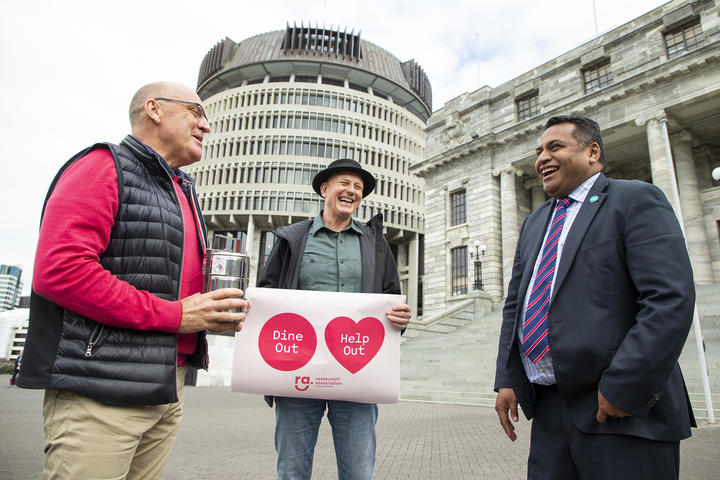 The association has delivered a 4000 signature petition to Parliament this afternoon, for MPs to consider adopting the UK's Eat Out to Help Out scheme.

Under the scheme, the government foots half of the bill for a meal eaten at a cafe, restaurant or pub from Monday to Wednesday until the end of August, with a limit of £10 or NZ$20.

He said the wage subsidy was not providing enough support.

"The wage subsidy is fantastic, but it is all the rest of the costs we have to work out to get through this period."

Restaurant Association CEO Marisa Bidois said to date there had been no targeted support for the industry through the pandemic, despite being one of the worst affected.

"Our Dine out to Help out initiative will put much needed cash back into the pockets of hospitality businesses that are really struggling whilst also helping Kiwis to get a freshly prepared meal at a discounted price," she said.

Commerce and Consumer Affairs Minsiter Kris Faafoi and National's Economic Development spokseperson Todd McClay were there to recieve the petition, with a contactless lunch delivery of curry and rice.

McClay said New Zealand's hospitality sector was paying a heavy price for the government's "bungling of the border".

"Today's petition is a plea for help from a sector on its knees.

"Hospitality, tourism and travel agents have been hit the hardest by the government's border failure and they need more targeted assistance from the government to save businesses, jobs and livelihoods," he said.

Faafoi said the intiative was an interesting idea, but the government was not making a committement to adopt it, as it was more focused on the wage subsidy.

"That's not to say we won't keep the dialogue open with the likes of the likes of the Hospitiality Asocciation and the Restaurant Association, they are very important sectors to New Zealanders," he said.