The National Party board will meet between midday and 1pm today to discuss the future of National MP Hamish Walker.

National's leader Todd Muller wrote to the board last night after he was told that the backbencher MP had been behind the leak of Covid-19 patient details to media, including RNZ.

Muller said he asked them to remove Walker from the party after it was revealed he had leaked the information.

A National Party spokesperson told RNZ the board will be meeting remotely on a secure online platform.

They could not confirm when a decision would be made on Hamish Walker. 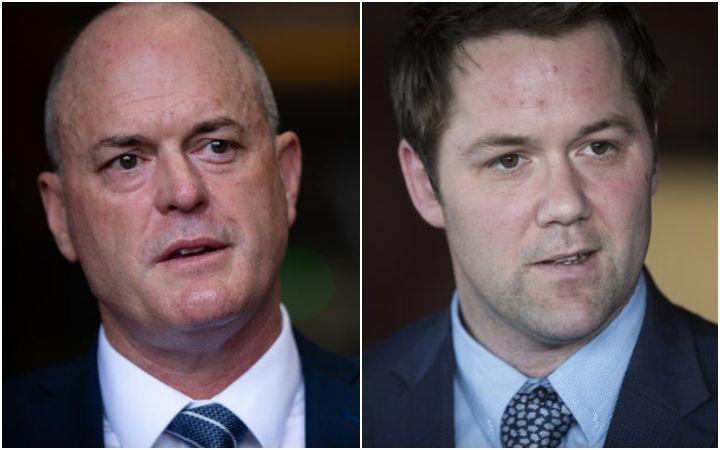 National Party leader Todd Muller has written to the party's board asking them to remove MP Hamish Walker from the party. Photo: RNZ

It was revealed yesterday that former National Party president Michelle Boag was responsible for leaking Covid-19 patients details to Hamish Walker, who then passed that information on to media.

Prior to that revelation, National Party leader Todd Muller described the leak as "loose, shabby and a reminder these guys can't manage important things well".

"The problem is when you've allowed a culture of sloppiness and clumsiness to take over and become pervasive, you know, really history suggests you need a new broom to be able to sort and set the tone from the top," he said just a few days ago.

Walker, who admitted the leak late yesterday afternoon, has already been stripped of his portfolios.

Muller told Morning Report there needed to be consequences and he has written to the party's board asking it to remove Walker from the party.

Muller said he became aware that Walker was responsible for the leak on Monday and was awaiting legal advice before passing that information on.

He said he hasn't spoken to Boag about the issue and he's not sure what the arrangement between her and Walker is.

Boag this morning stood down as Auckland Central MP Nikki Kaye's campaign chair for the upcoming election and no longer has any role with the party.

"I am personally, hugely angry. This is not the politics who reflects who I am as a person. It does not reflect the National Party."

The board will meet to discuss the matter today.

"Ultimately it's a board decision, but he's shown some serious lapses of judgement. It's totally inappropriate."

Privacy Commissioner John Edwards agreed it was an appalling lack of judgement.

"It's really difficult to justify using unwell individuals as pawns in that kind of game."

Edwards said MPs are exempt from privacy legislation so it falls to the National Party leader and board to administer discipline.

Boag, however, may have breached the privacy act, he said.

"I will be thinking about what, if any, response we make to that... those decisions are yet to be made."

Edwards said he's a little surprised the Auckland Helicopter Trust had access to the details.

"It's not immediately obvious to me as to why they would need information about people under quarantine.

"I'm very interested in understanding the breadth of that distribution of the information."

Labour MP Megan Woods told Morning Report the matter is one for the National Party to deal with.

"We've been really clear, leaking of that information is really disappointing, these are New Zealanders who had returned home to be safe, they have a right to assume their data won't be leaked to the media."

Emergency services across the board are supplied the names of people who have Covid-19, she said.

"That is because if emergency services need to come into contact with someone who has tested Covid positive for whatever reason, be that an airlift or whatever, that they have that information and make sure their staff is protected."