Finance Minister Grant Robertson is tempering expectations about whether he will follow Australia in rolling out a major Covid-19 stimulus package, saying his focus right now is on targeted support. 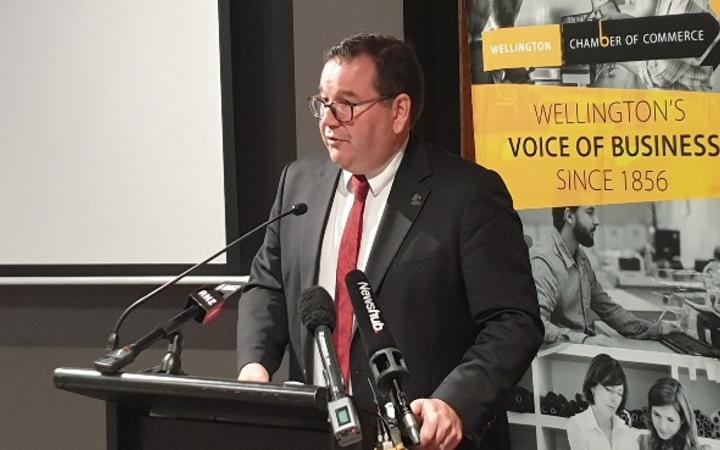 Australia's government today announced a $17.6 billion economic stimulus package, including tax relief for small businesses and one-off cash payments for welfare recipients, to try ward off a recession due to the coronavirus outbreak.

Speaking to the Wellington Chamber of Commerce this morning, Robertson said a wage subsidy scheme - to be announced next week - would be designed to roll out quickly.

"We will get the money out the door as soon as possible," he said.

Robertson said he had also instructed officials to develop a suite of "macroeconomic measures", including tax and welfare changes, in case of a major global downturn.

Speaking to reporters after his speech, he indicated New Zealand would not move to quickly follow Australia, stressing "cash stimulus" would be considered only as part of the "longer-term" plan for if the situation worsened.

"At the moment, we're more focused on the wage subsidy scheme."

Robertson pushed back against suggestions New Zealand was lagging behind Australia and the United Kingdom, which yesterday unveiled its own emergency fiscal stimulus package.

"In many ways, we're ahead of the curve," he said, pointing to the government's increased health spending and already-announced $12b infrastructure spend-up.

"Our stimulatory fiscal policy that we've adopted over the last two years is in contrast to [Australia's], so... what they're doing now endorses [our approach]."

"The strong message from the business community is... make sure what you do is tailored," she said.

"Generic cash payments wouldn't necessarily support those who might be experiencing larger-scale impacts versus small businesses, or necessarily for the time required."

National finance spokesperson Paul Goldsmith said the government had been "flat-footed" in its economic response and needed more urgency.

Goldsmith said the chief priority should be getting wage subsidies to businesses now, with details of broader stimulus in another "two or three weeks" depending on economic conditions.

"Eye of the storm"

In his speech to the Wellington Chamber of Commerce, Robertson said work was already underway on preparing for the "recovery phase" once the Covid-19 shock has subsided.

"While we are in the eye of the storm, it is vital that we push on with addressing the core challenges and opportunities for our future prosperity," he said.

"Our economy will recover from this - and we need to ensure we are well-placed to bounce back strongly when we do."

Work had already begun on the best way to re-engage with China, Robertson said, and he hoped to replicate that in other markets and sectors.

"The final shape of this package will ultimately depend on the economic shock we feel," he said.

"But it will include measures to diversify our export and import markets - this is one of many lessons that we are learning."

Trip to Australia will go ahead

The Finance Minister's trip to Australia will go ahead as planned tomorrow, despite the ongoing Covid-19 outbreak.

Robertson will hold talks with his Australian counterpart Josh Frydenberg to discuss the actions both governments are taking on the economic impacts of coronavirus, as well as other economic matters.

Robertson said New Zealanders are free to travel back and forth from Australia, so he is obeying the same travel instructions as everyone else.

But he said he was expecting a ripple affect from the newly announced US ban on travellers arriving from Europe.

"A 30 day ban like this will restrict business travel for example and there are obviously issues currently in the global markets around confidence, so you know these things are part of an evolving situation like this."

Robertson said the very best thing for the New Zealand economy right now would be containment of the virus.