The trustee of the New Zealand First Foundation and Winston Peters' personal lawyer has threatened a $30 million lawsuit against a National MP, in the latest twist of the donations scandal.

The Electoral Commission is considering a complaint about the use of the New Zealand First Foundation for donations, and whether the party has met disclosure obligations.

Brian Henry, who acts as a lawyer for Mr Peters, is one of the trustees of the foundation; former MP and party president Doug Woolerton is the other trustee.

National has been pursuing New Zealand First and the prime minister over allegations about the handling of party donations.

Yesterday, National's Nick Smith made a comment in Parliament about the donations.

This afternoon he tabled an email that he and National Party leader Simon Bridges received today from Mr Henry.

It said media reports had been "false and malicious", adding that the loan activities to the party were lawful.

Mr Henry said in his email there was one loan from the foundation of $73,000, which was repaid in full over two years. 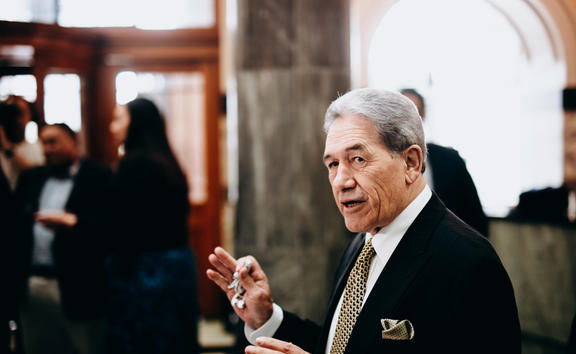 However, in a statement the Electoral Commission told RNZ that according to NZ First's returns, there was one loan of $73,000 entered into in Dec 2017, another separate loan of $76,622 was disclosed in May 2018. The Commission said it understood that loan was to replace the first loan. Then there was a further loan of $44,923 disclosed in April 2019.

In the email, Mr Henry invited Dr Smith and Mr Bridges to "repeat what you said in the House in public or apologise".

"Please note if you oblige with this request I will sue you for defamation for general damages together with special damages," the email reads.

Speaking to reporters outside the House, Dr Smith said he needed to be very "constrained and careful" about his choice of words, given the legal threat, but he described the email as "extremely worrying".

He said it was very concerning that an MP "going about their duties of holding the government to account" should be threatened in this way.

"I feel very strongly about the importance of New Zealand having a high level of transparency, I take great pride that when National left government New Zealand had the top ranking in the world as the least corrupt country and want to make sure that's protected," Dr Smith said.

"It makes you very nervous of that work when effectively the financial wellbeing of your family is being threatened." 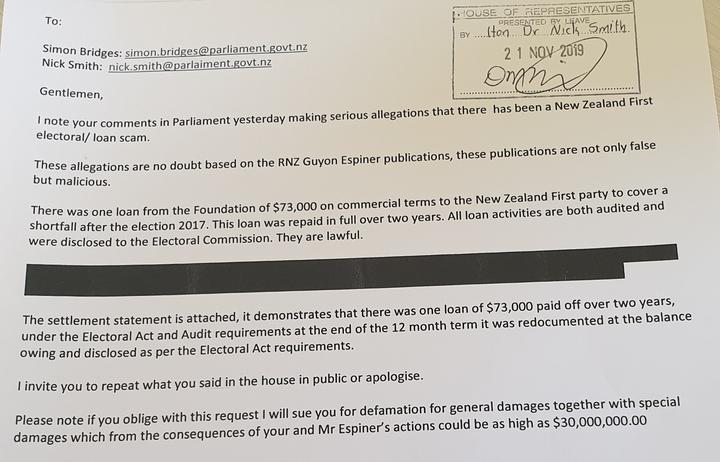 Mr Peters said he had no knowledge of his personal lawyer threatening a lawsuit against the National MP and leader.

"Why don't you ask him? I mean you're asking me about an action, the details of which I'm not privy to, and I think you should ask the person who is bringing the action - not someone who is not a source at all,'' he told reporters at a police graduation ceremony today.

Mr Peters also revealed the NZ First Foundation had voluntarily written to the Electoral Commission making itself available to meet to discuss any details about its investigation.

The prime minister said she had faith in the Electoral Commission to determine whether her coalition partner had complied with the law.

Jacinda Ardern said she had met with Mr Peters about the use of the New Zealand First Foundation for donations.

However, she did not seek an assurance from him that everything was above board - she said that was for the Electoral Commission to do.

Ms Ardern said it was not her role to investigate other political parties, that should be left to the likes of the Electoral Commission, police or the Serious Fraud Office.

"The whole point of having these independent agencies is that we allow them to do their job."