The manager who investigated whether ministry staff had leaked details of Winston Peters' pension overpayment has accepted a determined person could have covered their footprints. 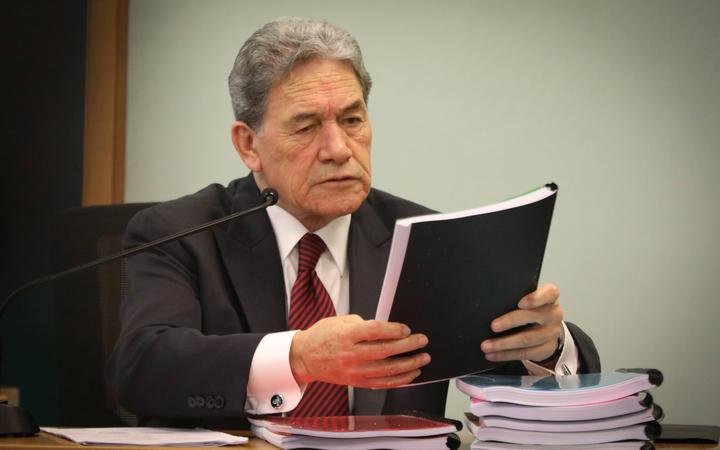 Winston Peters in court during his legal claim for a breach of privacy. Photo: RNZ / Claire Eastham-Farrelly

She also told the High Court in Auckland that the original source of the leak could have overheard the private details in a conversation or read them in a document sitting on a printer.

The Deputy Prime Minister is pursuing legal action, claiming a breach of privacy, after media received an anonymous tip-off in 2017 that Mr Peters had been overpaid his superannuation.

MSD national manager Debbie Raines was called by the Crown's lawyer Victoria Casey QC to give evidence on Friday.

She told the court she conducted an internal investigation into whether staff had leaked the NZ First leader's private information after it had become public.

Ms Raines - who has worked at the ministry for 38 years - said she looked into everyone who had viewed Mr Peters' records and scrutinised all phone and email communication between staff and media.

The inquiry identified 41 people who'd had some involvement with the case, but only 11 with enough information to possibly be the source, she said. All 11 staff members were then interviewed.

"There was no evidence to indicate that any staff member in the ministry was the source of the leak to the media," Ms Raines told the court.

"Do you agree that if someone set out deliberately to do this they would use all of their knowledge to try to leave no footprint behind?"

She also agreed that face-to-face conversations or those over a burner phone could not be tracked.

Mr Henry put it to Ms Raines that the "source at the top of the chain to the media" had to be one of a "very small group" of MSD staff or the two National Party ministers, Paula Bennett and Anne Tolley.

"Well, if it didn't come from that group... where could it have come from?" Mr Henry asked.

Ms Raines said while there was a "good possibility" that the one of them was the source, it's possible someone else also knew the information.

"I guess, to speculate, somebody could have heard a conversation," Ms Raines said. "They could have picked up a piece of paper off a printer."

The hearing will continue next week with both State Services Commissioner Peter Hughes and former MSD chief Brendan Boyle still to give evidence.