A review of how convicted Czech drug smuggler Karel Sroubek was granted residency has recommended the Immigration Minister only intervene in deportation cases as a last resort.

The report by QC Mike Heron, released today, strongly supports more power being given to delegated decision-makers (DDMs) within Immigration New Zealand (INZ) to keep Government Ministers "above the fray" of controversial decisions like that of Sroubek.

Sroubek is in jail and faces deportation after being convicted of importing almost 5kg of ecstasy.

He is appealing his deportation after the Immigration Minister Iain Lees-Galloway reversed his earlier decision to grant him residence.

The chief executive of the Ministry of Business, Innovation and Employment - the mega ministry that encompasses Immigration New Zealand - announced in November last year that Mr Heron had been commissioned to undertake a review of the processes by which decision-makers on residence and deportation matters are advised.

Mr Lees-Galloway came under fire for his decision to grant residency, which he subsequently did a u-turn on, after the Opposition began drip-feeding information to the media about Mr Sroubek's chequered past.

In his report Mr Heron laid out a more "sensible system" would leave responsibility with delegated decision-makers.

"I am of the view that DDMs, expert in the immigration area, are better placed to make deportation decisions in the first instance."

"The exercise of the discretionary power to suspend or cancel deportation liability should be delegated to DDMs in all but the most sensitive cases, with the Minister maintaining the ability to intervene (as the Act provides) as a last resort,'' Mr Heron wrote.

"A Minister may have less time and less experience than a DDM (who will have many years of immigration experience). Decisions can, as in the Sroubek case, become of significant media or public interest." 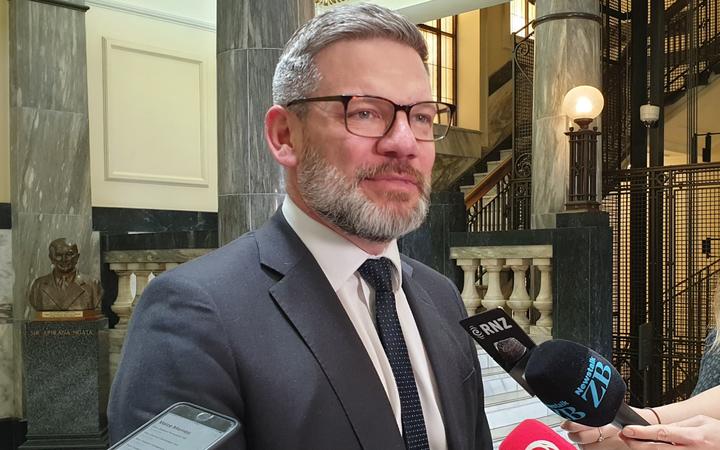 Mr Heron's report acknowledged in the Sroubek case, "decisions can bring intense pressure on the Minister".

"The Minister should not be placed in such a situation of risk given his or her importance in the system,'' he wrote.

"The Minister will remain above the fray but able to intervene as necessary to suit the policy of the government of the day.

"This would be well suited to unusual cases which might have broader implications for international commitments or the like,'' Mr Heron wrote.

The review concludes that the systems used by INZ are sound and robust but found some room for improvement.

A recommendation in 2015 to make changes to the power of absolute discretion were not adopted by then-Immigration Minister Michael Woodhouse.

That's left a scenario where a minister can make decisions without receiving any advice or recommendations and leaves little ability for the ministry to push back on decisions.

Such is the case with Sroubek, that ministry officials were surprised by the decision to grant residency given the sufficiently powerful grounds to deport him.

Mr Lees-Galloway has been under fire for not reading the complete file and subsequently having to reverse the residency decision after the Opposition began drip-feeding information to the media about Sroubek's chequered past.

He's refused to say whether in hindsight, he should have read the full file and sought advice from officials.

He said the report shows he acted appropriately, within a flawed system and while he refused to say whether in hindsight, he should have read the full file and sought advice from officials - he has changed his decision making process.

The Ministry of Business, Innovation and Employment's chief executive Carolyn Tremain, who commissioned the review, has stressed that the decision around Sroubek firmly sat with the minister.

The five recommendations are:

Mr Heron wrote that these changes would arguably better utilise the DDM resource, streamline the process and enhance the quality of decisions.

"This is consistent with the recommendations in the Beaglehole Report that almost all Ministerial discretions be delegated,'' he wrote.

It was also noted that the Sroubek case file summary did not contain the information about Sroubek's statements regarding return to the Czech Republic.

"It would have been optimal for such information to have been available to the Minister when he was considering the case (specifically if the Minister had indicated that the fear of returning to the Czech Republic was a relevant consideration).

"The case file summary omitted that he was an excluded person and was granted a visa as a result of administrative error.

"Ideally this would have been included also. That said, the discretion to suspend or cancel liability is an absolute one and whether this would have made a difference is not for me to comment,'' Mr Heron wrote.

The report concluded INZ's staff and its Resolutions team are well placed to consider and appropriately decide issues regarding residence deportation liability.

"What we still don't have is a clear explanation from Iain Lees-Galloway about why he made this decision."

Mr Mitchell said officials had presented "sufficiently powerful" grounds for Sroubek to be deported and yet the Minister went against their advice.

"Mr Lees-Galloway didn't read the file in full, he spent just 45 minutes skimming it. He accepted a convicted criminal at his word that he couldn't go back to his home country because of concerns for his safety despite the fact he had gone back for visits.

"It's a shame that so much time and money has gone into this report just to tell us that Iain Lees-Galloway isn't up to the job."

Mr Sroubek would be considered for parole again in January 2020 after the Parole Board found last month that he posed an "undue risk" to the community.

2008: Sroubek gains residency under the name Jan Antolik under the sports talent category as the current world kick-boxing champion.

2009: He faces charges of kidnapping and aggravated robbery.

2009: The High Court in Auckland gave Sroubek permission to travel to the Czech Republic, ahead of an impending court case.

It was stated: "He is the owner of two businesses which are involved in trade with parties in the Czech Republic and it is necessary for him to go there from time to time in order to facilitate transactions involving the import of Czech goods into New Zealand."

The judgement also said Sroubek had been granted a similar application earlier in the year, despite the opposition of the police.

2009: Sroubek bought a house for $490,000, using mainly cash deposits made into his bank accounts, together with a mortgage. He funded the mortgage installments through cash payments.

2009: No income was declared on Sroubek's tax return.

2011: Sroubrek was found guilty of supplying false information to the Immigration, and of having a false passport. After completing 200 hours of community service he was discharged without conviction, avoiding any risk of deportation.

2011: Sroubrek was charged for being a party to the manufacture of a Class C controlled drug. He was convicted, but that conviction was quashed, and a retrial never went ahead. on appeal.

2013: An arrest warrant is issued for Sroubek in 2013 for outstanding criminal proceedings.

3 June, 2016: Sentenced in the Auckland District Court for the offence of importing MDMA.

2017: He appealed his drug conviction, saying the verdict was unreasonable and the initial investigation flawed. The appeal was dismissed.

19 September, 2018: Immigration Minister Iain Lees-Galloway writes a letter to Sroubek saying he determined that the 37-year-old holds a residence class visa in a false identity, making him liable for deportation. However, the minister cancelled the liability for deportation and granted Sroubek residency under his real name.

28 October, 2018: Sroubek is denied parole, with the parole board considering him unsafe to release back into the community. He is due to be reassessed in a year.

31 October, 2018: Newstalk ZB reports that Sroubek had already been back to the Czech Republic

31 October, 2018: Simon Bridges calls for Iain Lees-Galloway's resignation and confirms the case never went before the immigration minister in the National government.

1 November, 2018: Court documents confirm Sroubek returned to Europe in 2009, although it is not clear whether he visited the Czech Republic.

1 November, 2018: Mr Lees-Galloway orders an investigation into aspects of the case but does not give details due to "strong" legal reasons.

1 November, 2018: In Parliament, Mr Lees-Galloway repeatedly refuses to answer questions about the case from the National Party.

2 November, 2018: The Czech Republic said it was soon to launch efforts to extradite Sroubek from New Zealand.

18 September, 2019: Parole board releases decision not to release Sroubek saying he poses an undue risk.