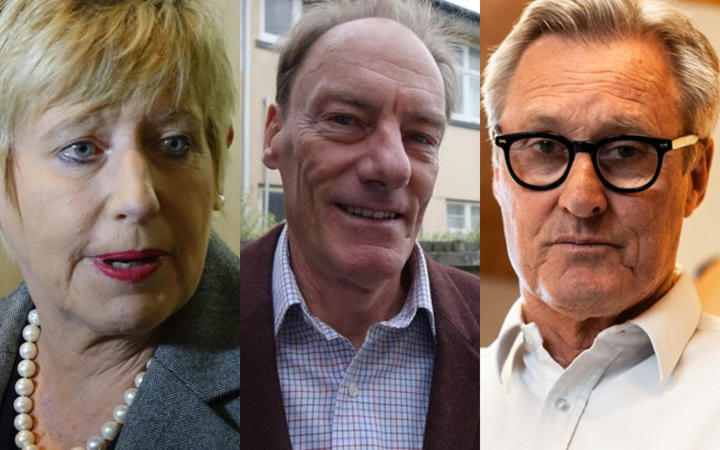 Lianne Dalziel, John Minto and Darryll Park are all vying to be Christchurch's next mayor. Photo: RNZ / Facebook

One thing voters can be sure on is a commitment to getting chlorine out the city's water supply, with all three candidates promising to do so.

Canterbury's water supply has been treated since early last year after the city began upgrading its wellheads, and 70 percent of the city's water is set to remain chlorinated until a water safety plan is signed off by the government.

It was up-and-down evening for Mr Minto, who is trying his hand at the mayoralty for a second time. His key messages - to hold onto council assets, improve social housing and clamp down on landbankers - resonated with many in the crowd.

"The undeveloped land in the middle of the city, it's held by land bankers. They're just holding on to the land waiting for the price to go up," he said.

If elected, he would increase the rates on undeveloped land in the city centre, he said.

"Either they develop or they sell and the council will be a willing buyer."

Yet Mr Minto was met with boos and jeers from the crowd when he suggested that the council allow freedom camping within the four avenues as a way to get more people into the inner city.

Last night's debate was also the first time many voters heard from political newcomer Darryll Park. A prominent entrepreneur in the city, he said he would bring a business-minded approach to local politics, promising a review of the council's assets.

"When you look at them, out of the eight [council-owned assets], three of them are actually making money. Now the others are not making money. If you would ask yourself why?

"If it's because of bad management or poor management, you'd fix it with better management. You wouldn't sell it."

He said even if the council were to sell it would not have to sell the whole asset, just a stake, and maintain majority ownership.

Mr Park and Ms Dalziel both supported the council part-funding a multi-purpose stadium in the central city. Mr Minto was opposed to the project, saying it would be irresponsible given the other work needing to be done in the city.

Ms Dalziel and Mr Park traded shots throughout the debate, with the latter taking shots at former's leadership.

Ms Dalziel shrugged off the jibe and was quick to criticise Mr Park, who said more focus needed to be put on improving roads for drivers, not cyclists.

"We've just had a question on climate change. And you're saying that the here and now takes precedence over the future," she said.

"I think we have to plan for the future as well. And for every one of those cycles that you get out of a car and onto the road on a cycle, or onto a cycle way, the bigger it is for the motorist

Scanning the crowd, it was clear that very few young people in attendance. The lack of engagement by young people in local politics was a question put to Mr Park after the debate.

He said young people were disillusioned because they thought the same people would win. He hoped his campaign would bring much-needed competition, making people interested.

Ms Dalziel said a debate hosted by the Chamber of Commerce would not bring young people in, but there would be opportunities for young voters to meet and hear the positions of candidates.

"The young people themselves have their own meet the candidates event organised," she said.

She said people under the age of 30 were concerned with climate change and sustainability.

Mr Minto was unable to comment on the issue of political engagement and young people because he had to leave as soon as the debate concluded.

Voters have five weeks to make up their mind with postal voting closing at midday on 12 October.