The National Party is on board with the government pulling Kiwi troops out of Iraq next year - on the condition Australia and the United States also withdraw. 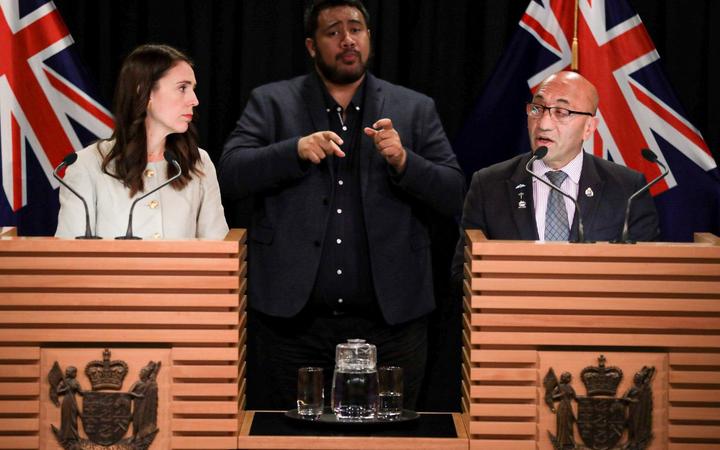 The prime minister announced yesterday that troops will be reduced over the coming year before the deployment ends altogether by June 2020.

Up to 95 troops are currently training Iraqi security forces in a joint mission with Australia at Camp Taji that began in 2015.

The number will be reduced to a maximum of 75 next month and 45 from January.

New Zealand's role in Afghanistan is also changing with troops remaining for another 18 months, but the role will move towards more of a peace and security role.

Jacinda Ardern said it was time to leave Iraq.

"New Zealand has made an enormous contribution in Iraq, but it's time for that contribution to change," she said.

"We have made a decision based on the international environment and that's why at the same time our contribution - while altering - will remain in Afghanistan, because we are taking a wider view to the global environment, and the threat that remains.

Both Ms Ardern and Defence Minister Ron Mark somewhat let the cat out of the bag yesterday that Australia too was reducing its deployment.

Australia is yet to make a formal announcement but Mr Mark told media yesterday the New Zealand decision was part of a carefully planned exit strategy alongside partners.

"We took a role of about a third/two-thirds contribution in partnership with Australia. This reduces down to a quarter/three-quarters and we will be downsizing alongside them and working with them, not just walking away from the mission," Mr Mark said.

"This is a carefully planned exit strategy and its one in which all partners and everybody supports."

Ms Ardern told Morning Report the government had been in closest contact with Australia over its decision to pull out of Iraq and that Australia "absolutely understand our position".

The US had raised no concerns that she was aware of.

She also said the government would contribute to Iraq's stabilisation funding as it rebuilt.

That rebuild had been estimated to potentially cost $88 billion.

National Party defence spokesperson Mark Mitchell said the decision to leave was the right one, providing everyone went at the same time.

"It looks okay with us, it would be dependent on whether it's in line with what our partners are doing - especially the Americans and the Australians,'' he said.

In a statement Australian Defence Minister Linda Reynolds said Australia and New Zealand "consult closely on their respective deployments in Iraq and Afghanistan".

"Australia is proud to support the Iraqi Security Forces, alongside its New Zealand counterparts. We will continue to work closely with New Zealand as it gradually draws down its footprint in Iraq,'' she said.

"Australia regularly reviews its overseas operations, taking into account the needs of the Iraqi Government and the operational context on the ground."

Back in New Zealand, the Green Party are claiming a win, after years of advocating for the withdrawal.

Defence spokesperson Golriz Ghahraman said the party worked constructively with Mr Mark to get to this point.

"What we would have liked is that the deployments weren't extended last time they were extended but what we've done is worked really hard to get a date and now we have a definite date,'' she said.

Ms Ardern said New Zealand's troops had done an incredible job, but now it was time to come home and look at the contribution the Defence Force could make elsewhere.