Interim name suppression has been granted to a man accused of attacking the Green Party co-leader James Shaw. 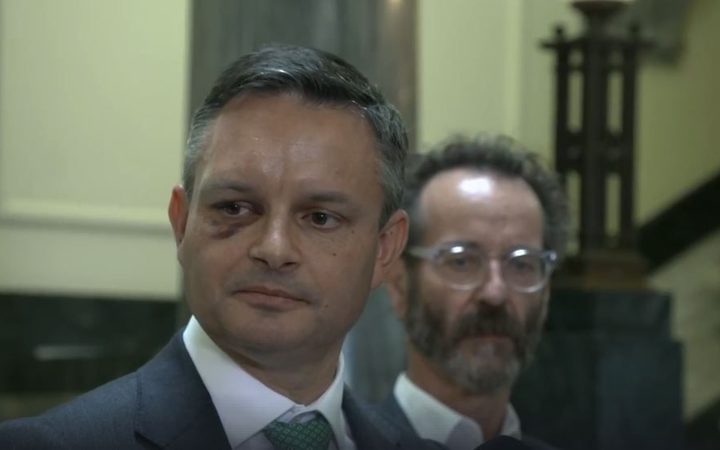 Green Party co-leader James Shaw is speaking in Parliament after he suffered a broken eye socket in an attack yesterday. Photo: RNZ

Mr Shaw was grabbed and assaulted near the Botanic Gardens in Wellington shortly before 8am yesterday.

The 47-year-old man accused of attacking James Shaw appeared in the Wellington District Court on Friday afternoon on one charge of injuring with intent to injure and was granted interim name suppression until he reappears in court.

The man entered no plea and his lawyer, Marty Robinson told the court his client had been badly affected by a family-related medical event earlier in the week.

In seeking interim name suppression, he also said the man ran a business which could also suffer if it was linked with the attack on Mr Shaw.

Judge Ian Mill granted the man on strict conditions, including that he not attack James Shaw and not use violence against any person.

Police sought another condition ordering the man to stay out of Wellington, but Mr Robinson said that would be a disproportionate imposition because it would affect his client's ability to continue operating his business.

Judge Mill granted that condition, saying the man cannot enter Wellington until his next court appearance except to meet his lawyer.

The man will reappear in Court on 29 March.

"I feel fine, I have a bit of a sore head," Mr Shaw told reporters at a press conference in parliament this afternoon.

He said he would not let the incident deter him from walking to work, but people around him were left shaken up by it.

"A lot of people have these kind of incidents occurring and come off a lot worse than I did.

"We live in a society where these things do happen, I have always tried to live my life in the knowledge that that kind of thing can happen but not letting that dominate my choices."

Mr Shaw said doctors would be monitoring his condition and have given him painkillers and antibiotics.

He said while there was a risk of concussion, he had no symptoms of it so far.

Mr Shaw said he could not speak in detail about what happened as it was before the courts, but did say the person who attacked him knew who he was and drove off afterwards.

The attacker only looked "vaguely familiar", Mr Shaw said, but said he did not know him.

Mr Shaw said the attack should not mean any changes to the safety procedures towards politicians in the country.

"This is one incident and I know that there are other incidents in history of politicians being attacked.

"I don't think we should change our procedures just based on one incident. I do think that one of the great things about New Zealand's political culture is that for the most part we are open and accessible.

"I like being open and accessible, I like the fact that I can walk to work, and I intend to keep doing so."

He said he was not alone in facing difficult situations as a politician.

"Some of our MPs, particularly Marama and Golriz, get quite a lot of death threats and quite a lot of really violent social media directed towards them."

Politicians from all sides of the political spectrum have expressed shock at the attack on the Climate Change Minister as he walked to work.