How to minimise the impact of global economic headwinds on New Zealand was the focus of the Prime Minister's first major speech of the year. 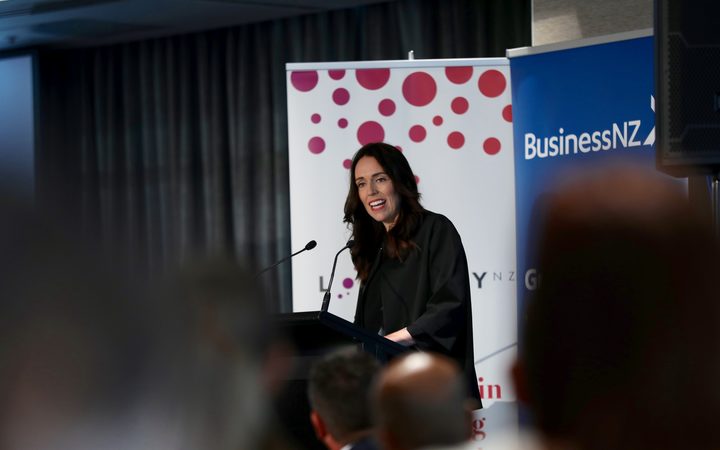 Prime Minister Jacinda Ardern has delivered her address to a business audience at a central city hotel in Auckland. Photo: RNZ/Cole Eastham-Farrelly

Jacinda Ardern has delivered her address to a business audience at a central city hotel in Auckland, in stark contrast to the wooden church in Wellington from where she laid out her plans to reduce child poverty in a scene-setting speech, roughly a year ago.

Fresh from the World Economic Forum in Davos, the challenges facing economies around the world were high on Ms Ardern's mind.

In particular, escalating trade tensions between the United States and China, with New Zealand so reliant on China for export revenue, she said made this country vulnerable.

"Trade tensions in the wake of tariffs imposed by the US on Chinese imports dented the strong growth seen in 2017.

"And the worry for us is that further reductions in Chinese exports could cause a material slowdown in its economy, with adverse effects for New Zealand exporters."

She cited International Monetary Fund projections for global growth to ease from 3.7 percent in 2018 to 3.5 percent in 2019 due to "rising trade tensions, political uncertainty and less stimulatory monetary and fiscal policy".

"The finger of blame for the slowdown in global trade growth is generally pointed at countries pursuing increasingly protectionist policies, which are naturally affecting confidence and investment plans", she said.

In response the government would "double down" on securing trade deals with the likes of the European Union and Britain.

Ms Ardern also flagged potential "far reaching" changes to the polytech and institute of technology sector, while making sure there's enough capacity around the country to provide the required skills training.

"Over the last two years this government has been forced to spend $100 million to bail out four polytechnics, and that is a pattern that started before we took office.

"That is not the sign of a healthy and sustainable sector," Ms Ardern said.

She listed three "structural issues" in the sector: Poor co-ordination and integration, a duplication of services and a lack of scale and capital.

"We need to move away from the cycle that sees course delivery at institutes boom when the economic cycle turns down and then dive when the economy improves, while on-the-job training providers face the opposite cycle," she said.

"The elephant in the room" - business confidence - was also addressed.

"Pleasingly, the elephant has gotten a little bit smaller in the past 12 months. Perhaps it got to know its company and decided it wasn't quite as scary as it first thought."

She also acknowledged the residents affected by the bushfire in the Tasman District, and the work being done by emergency services and the many people volunteering.

"One of the coordinators of the many helicopters hauling water over the fire for 11 hours at a time was from Fielding and had travelled through the night to get there.

"He also happened to be colleagues with my first cousin - it was a true New Zealand moment."

Ms Ardern also talked about how to make New Zealanders more resilient, in the event of tougher economic times, and how the government intended to use the 2019 Wellbeing Budget to help to achieve that.

"Zero real content, no policies whatsoever, and no sense of plan," he told reporters at his party's caucus retreat in Hamilton.

He said the government was disorganised and hadn't done the hard work despite touting 2019 as "the year of delivery".

"We're stuck in what we had last year - vague talk, intentions, rhetoric - but now we need to see the reality of that and what it really means on the ground."

Ms Ardern was blaming slowing growth on the global economy rather than accepting her government's responsibility, he said.

"That is a complete cop-out. There's no doubt that the anti-business approach of this government ... is meaning that our economy was slowing well before we saw the rest of the world do that."