The prime minister says officials putting New Zealand's freshwater up for sale will not happen under the coalition government. 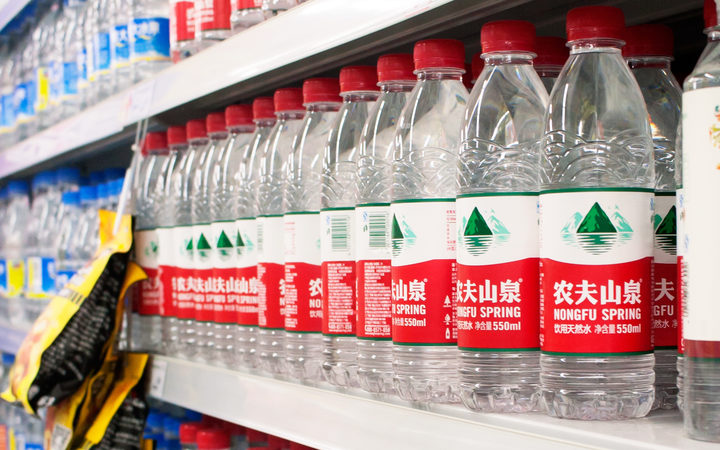 That revelation has prompted calls from anti-water bottling campaigners for assurances that's no longer happening.

Prime Minister Jacinda Ardern said she was appalled to find out about what NZTE had been doing.

"West Coast Franz Josef was listed as one of the pristine glaciers that overseas investors might come and want to take a stake in," she said.

"I find it incredible that we would have been in that position in 2015 and absolutely unacceptable."

Ms Ardern did not see bottling freshwater as an "opportunity" for overseas investment in New Zealand.

Earlier this year, Nongfu Spring was given approval to expand its Otakiri Springs water bottling plant near Whakatāne, with the aim of exporting more than one billion litres of water a year. The decision is currently being appealed through the Environment Court.

The company's application to the Overseas Investment Office, released under the Official Information Act, said NZTE officials "actively encouraged" it to buy a bottling facility.

"NZTE indicated that investment in New Zealand water enterprises would be welcome," the application said.

"How much of this has been going on? We've just scratched the surface with these documents," Ms Gladding said.

Ms Gladding called for the new government to confirm it had put an end to any initiatives encouraging foreign bottlers to invest in New Zealand.

New Zealand should not be welcoming bottling companies to it shores, she said.

"You've got to wonder why the government was pushing this because the benefits to New Zealand are insignificant when the environmental costs are taken into account."

Whakatāne environmentalist Mawera Karetai told RNZ she was "absolutely gobsmacked" by the revelations.

Although the new government is not in favour of such action, Ms Karetai wants someone to ensure the message has reached NZTE.

"I would like it if somebody knocked on the door at NZTE and said, 'If you're still trying to entice people here to take the water offshore, please stop doing that!' "

In its application, Nongfu Spring warned that turning its bid down would likely "adversely affect New Zealand's image overseas" given the government sought out the investment in the first place.

Ms Karetai said that was "bullying and bollocks" and New Zealand should not have given in to it.

The minister responsible for NZTE, David Parker, was not available for an interview, but a spokesperson pointed out the actions occurred under the former government.

NZTE declined to front anyone for an interview, but in a statement confirmed it had initiated contact with Nongfu Spring and other potential investors.

"In 2015, NZTE had a number of water businesses that were looking for investment to increase the scale of their businesses, particularly with a view to potential export markets.

"We introduced domestic and international investors, and any potential sale involved a willing buyer and a willing seller.

"NZTE always advises that a final decision on any sale rests with the regulators."