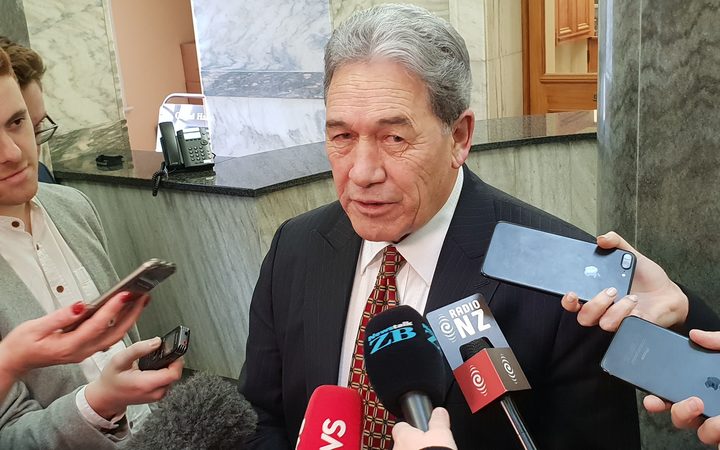 Deputy Prime Minister Winston Peters appears to have been mixed up over new checks on strawberries in New Zealand. Photo: RNZ / Jane Patterson

Needles were found for the first time in New Zealand yesterday.

They were in a punnet imported from Western Australia and bought by a customer at St Lukes Countdown in Auckland.

A rash of similar cases had hit Australia over the past two weeks.

At this afternoon's post-Cabinet briefing, Mr Peters said the government would work to ensure any imported strawberries were safe.

"There's going to be, in terms of exporting into this country, screening of every strawberry punnet."

New Zealand authorities would conduct the screening, he said.

"Countdown themselves will be as well; there'll be no more strawberries come into this country without being all screened."

What does the screening look like? a reporter at the briefing asked.

"Well it looks like something capable of detecting metal in them," Mr Peters replied.

He was asked if New Zealand airports had the necessary technology.

"Well I don't know... other than to say - if it's strawberries it'll be going through that sort of rigorous investigation before it lands on our shelves of our supermarkets."

However, Primary Industries Minister Damien O'Conner said that was not correct as there would be no new checks.

He said Australian strawberries were still coming into the country, and he was unsure as to the origin of the needles.

"The initial indications were strawberries with needles in them from a particular line, that appeared to be the factor in front of us so we [didn't] think that additional restrictions were required at that time," he said.

"What we have in front of us now appears to be something different, but that is a basis for a police investigation."

Mr Danstead said the strawberries exported from Australia were checked through a metal detector before they left the country.

The crisis had come just as strawberry growers here were about to put their fruit on the market.

Auckland grower, Phil Greig, supplied the fruit to supermarkets across the country.

He was confident the needles found yesterday were put there in Australia, before the fruit was imported to New Zealand.

But he was taking precautions to ensure needles were not placed in the berries he supplied, he said.

"It's not a New Zealand problem, it's an Australian problem, but we are watching what we are doing too."

Countdown said in a statement the last shipment of strawberries arrived last Sunday and the next day, the supermarket stopped ordering the fruit from across the ditch.

Customers were still able to buy the imported berries from stores until all remaining stock was pulled from the shelves yesterday.

Barbara Docherty purchased a punnet of imported strawberries from a Wellington Countdown on Thursday.

She was assured by the store's manager that the "Choice" brand was a safe supplier.

"I wanted to know why they didn't even put a sign up in front of the strawberries and say basically these are from Australia, but we have checked our supplier, but just to be warned or to be weary or to cut them up, something to alert customers," she said.

Daniel Laufer, a marketing professor at Victoria University, said to ensure consumers did not panic, retailers and suppliers needed to make it clear needles had not been found in New Zealand grown strawberries.

"It would be very helpful to emphasise that there are safeguards here in New Zealand that growers have which minimise the chances of something like that happening, compared to the Australian context," he said.

Following yesterday's discovery, there had been no new reports in New Zealand of needles being found in strawberries.