Regional security and other pressing issues like climate change will be top of the formal agenda at the Pacific Islands Forum in Nauru this week. 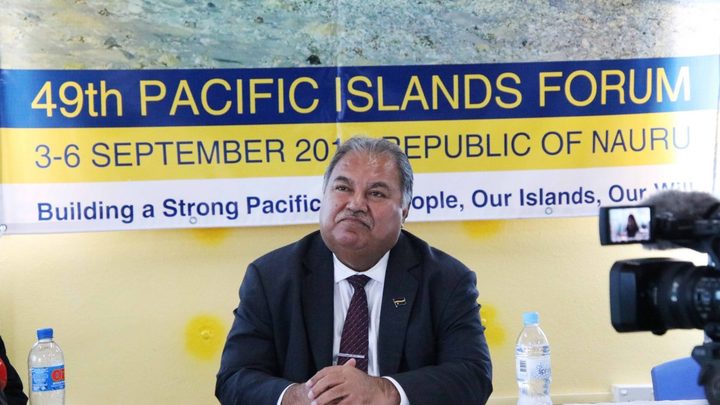 But leaders will also be confronted with the situation facing refugees in Australian-run camps on the tiny island, living just kilometres from forum events.

The Nauru government has already started a pre-emptive PR campaign, with its president blaming Australian advocates for the plight of refugee children.

New Zealand says it's an issue that will be raised at the forum, however Australia's new Prime Minister Scott Morrison will not be there to hear it. He has decided not to attend, and has sent newly appointed Foreign Minister Marise Payne in his place.

Winston Peters plans to meet with Ms Payne while in Nauru, and it will be the first time the pair have sat down together in their respective foreign minister roles.

He and Prime Minister Jacinda Ardern visited Samoa, Niue, Tonga and the Cook Islands in March, announcing a raft of increases to aid and development funding.

But this forum is an opportunity for the pair to meet with leaders from around the broader region.

"Well I'll have a chance to meet a lot of them on the way over, and some of them I've been talking to very recently. So that'll be more than half of them. And I'll get the bilateral with Marise Payne," Mr Peters said.

Ms Ardern had initially indicated she would like to meet with some of the refugees, but said it was something she had since thought long and hard about.

"I've given a lot of thought to this," she said. "I do have a short amount of time there, but I do want a perspective from those who are residents on Nauru."

She plans to reiterate New Zealand's offer to take 150 refugees from across Nauru and Manus Islands.

"But if I meet with individual refugees, how do we decide who they would be? Does that raise an expectation that I then can't fulfil for them as an individual?

"So those are some of the things weighing on my mind."

Ms Ardern will be there for one day only, flying to Nauru early Wednesday morning for the leaders' retreat, which is considered the most important day of the forum.

Leaders are expected to sign a new regional security declaration at the conclusion of these talks, which Mr Peters said would cover off a number of emerging challenges facing the Pacific.

"There's human security, there's environmental and resource security, trans-national crime and cyber-security challenges - all of which are part of this declaration."

"It's very important that he talks to Fiji and gets them to withdraw their claim from a year or two ago that Australia and New Zealand should leave or be thrown out of the Pacific Island Forum, with the view that we are not really Pacific countries.

"We are, we're good neighbours, and for us all to move forward there needs to be a clear dialogue around that."

When it comes to any plans to meet with refugees or raising issues of human rights, Mr McClay said New Zealand could stand firm on its independent foreign policy.

But he warned against any moves that may destabilise its relationship with Australia.

"Fundamentally when it comes to refugees, the Australian border does provide some protection to New Zealand. So that refugees on boats don't make the arduous journey down to New Zealand which is very, very risky.

"So ultimately he must be very diplomatic in this."

But the pressure is already on Nauru, even before the leaders arrive.

Refugee advocates have been increasingly vocal in their criticisms of the conditions the refugees continue to live in and about the way they are treated.

They also say the government there is cynically trying to pretty up the place, with mouldy tents which have housed refugees for years being pulled down just last week.

Media coverage has also been a contentious topic ahead of the forum, with limits put on the number of journalists attending and guidelines around reporting in place.