New data shows China's aid dominance in the Pacific is being overstated. 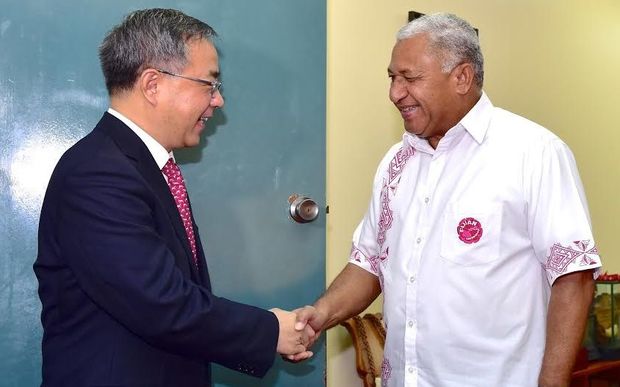 The data shows Australia and New Zealand have pumped the vast majority of money into the region - totaling $7.79 billion since 2011 - making up 55 percent of all aid to the Pacific.

Much of the political rhetoric around aid to the region is that China is dominant and trying to buy influence.

But the Green Party's global affairs spokesperson, Golriz Ghahraman, said much of that rhetoric was driven by xenophobia.

"Well it's a bit like all that talk of Chinese sounding names in terms of the investment in homes in New Zealand, whereas we found out it was such a tiny number of foreign investors and in fact we need to curtail speculative investment altogether - so it is xenophobia unfortunately,"

Terence Wood is a research fellow with the Development Policy Centre at Australian National University.

He said another factor was that China was a relatively new player in terms of giving aid to the region.

"The other thing that sometimes people, to place an increased emphasis on China's giving, is that some of the aid that China gives to the Pacific is given as loans whereas Australia and New Zealand tend to give almost all of our aid to the region as grants so loans come with an additional layer of complexity in so much in that countries become indebted."

Massey University senior lecturer Marc Lanteigne told Morning Report there was no competition to begin with between Australia, New Zealand and Chinese developments in the Pacific region.

"One thing to note is that China's aid and assistance tends to be of a different calibre than what we've seen from New Zealand and Australia," he said.

"Like for example a lot of Chinese development projects tend to be more infrastructure based, so specific buildings, properties and so forth whereby Australia and New Zealand who have obviously had a much larger history in the region expanded out to education, training and so forth."

Foreign Affairs Minister Winston Peters said the risk for many Pacific nations was that they simply could not afford to take on the loans.

"There are some economies, for example, that have got well above 45 percent of debt. Now 45 percent of debt is not high internationally, I mean Germany is much higher, but here's the rub, they can't pay it back - Germany can."

The Lowy Institute data shows that since 2011, China has provided $853 million in loans to the region, but that was less than the amount that the World Bank and Asian Development Bank have provided in loans - which totals just over a billion dollars.

The institute also reports while China put in just eight percent of total aid, it does focus on status projects and infrastructure lending that inflate its presence in the region.

Mr Peters said some of that money was not being well spent.

"There are a number of projects which don't stand investigation, the quality of them has been seriously inferior and we have raised that, for example, with the Chinese Government.

"If you are going to do work to do with infrastructure, it has to be of first world standards, it cannot be inferior, you can't have the concrete cracking and splitting after 10 years and I've seen that in the islands."