The government's current plans to raise revenue won't be enough to deliver on its promises without cutting or changing some existing programmes, Finance Minister Grant Robertson says.

In his first major speech as minister, Mr Robertson set out the government's plans to a business audience hosted by ANZ in Auckland.

Mr Robertson reaffirmed policies including a free year of tertiary for some, a families income package, raising the minimum wage and resuming Superannuation Fund contributions.

"In order to meet these rules, it will require discipline. We have an ambitious programme and a plan to deliver on", he said.

Mr Robertson said the government would have more money from scrapping National's planned tax cuts, and cracking down on tax evasion and property speculators.

"But that will not be enough in itself. We also need to reprioritise and seek out programmes that are good value for money."

Ministers have been directed to review all of the spending in their portfolios.

"If programmes are found that do not match these priorities then ministers should consider whether this funding can be re-invested in new, higher priority areas which match our strategy.

He said that work was already underway and would contribute to the planning for Budget 2018.

Afterwards, Mr Robertson told reporters this would be a two-year process.

'I think it's a good discipline for ministers to look at that, and obviously that's what happens when governments change, there will be programmes that are supported by one government that aren't supported by another one."

"It would be a problem if they started cutting programmes that New Zealanders rely on that they hadn't mentioned during the election campaign.

"They have to be careful not to say well before the election 'we said we could do all of this, oh now sorry the fine print is we have to cut some programmes in order to achieve that'." 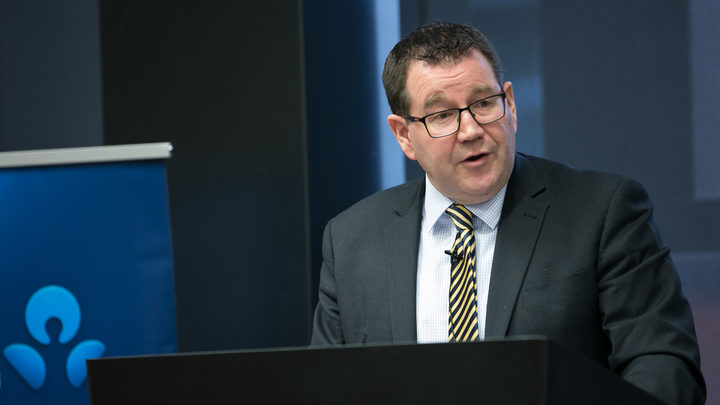 Mr Roberston said economic growth may slow in 2018 "while the transition to a productive economy occurs". Photo: RNZ / Dan Cook

Mr Robertson also acknowledged there may be a slow-down of economic growth next year as the housing market cools and immigration is tightened.

"We'll be swapping out population growth and the buying and selling houses to each other as our two main growth drivers for much more sustainable ones. That sounds like a good description of our plan.

"If that means slightly lower growth for a year while the transition to a productive economy occurs, then that will be a price worth paying."

Mr Joyce said it was interesting the minister was already preparing New Zealanders for a slowdown.

"Of course that wasn't predicted in the settings coming up the election so if there is a slowdown that will predominantly be because of the policy changes ... and they have to own that because there's no reason we shouldn't be tracking at around 3-percent growth."

The most recent ANZ monthly business survey showed sentiment is deeply negative with a net 39-percent of those surveyed expecting the economy to deteriorate over the next 12 months. That was the lowest level since early 2009, and compared with a net 10-percent pessimism level in October.

Mr Robertson said business appreciated hearing directly from ministers about how they planned to run the economy and he was "reasonably relaxed" about the fact there would be some uncertainty with a change of government.

"There are a number of other factors affecting the economy: the housing market changes, there's been a bad winter for a lot of the agricultural sector - those things will always affect confidence".

John Barnett from Endeavour Ventures was in the audience and said it was natural for there to be some nervousness, as change was "hard to process" after becoming used to one administration.

But he said a number of people were saying "Oh it's much better than I thought it would be", and that the minister gave a "coherent" address.

"I thought it was ambitious for the country and he joined the dots up very well."

Andrew Fisher from Ecostock said he appreciated the pitch from Grant Robertson to encourage central and local government to work together, and his focus on the regions.

Some of the questions from the floor were about ensuring a flow of skilled workers and whether that would still happen with the planned immigration changes.

Mr Fisher said, like most businesses, that was important to him and he was reassured by the minister's response.

The Half Year Economic and Fiscal Update - effectively a mini-Budget and an update on the Government's first 100 day plan - will be released on 14 December.