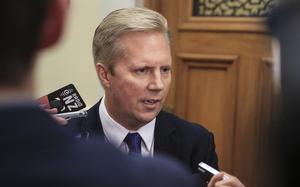 Trade Minister Todd McClay said the talks for a free trade deal with Mexico, Chile, Colombia and Peru would benefit New Zealand exporters and businesses, with lower tariffs and better access to the markets there.

The four countries have formed a trade bloc called the Pacific Alliance.

Speaking from Colombia, Mr McClay said a deal would help boost New Zealand's $1 billion in trade with the countries, which have 221 million consumers between them.

"South America is a growing market. All of these countries are opening their economies and signalling they want to do trade deals with the world," he said.

"For New Zealand to be one of the first cabs of the ranks means that we have an advantage. We can get a deal done quickly that gets better access for New Zealand businesses into these markets."

Mr McClay said it was hoped the trade deal would be completed within a year.

Dairy and food products make up some of New Zealand's biggest exports to Latin America.