Dozens of dogs joined protesters outside Parliament today to help hand over a petition to save their furry friends from being killed.

The petition, signed by more than 15,000 people, calls for the government to make it mandatory for animals used in research to be offered up for adoption instead of being euthanised.

It was a particularly emotional day for Caroline Press-McKenzie.

Her adopted beagle Doris, who is the face of the campaign, died just 10 days ago.

"I've lived with an animal that's come from a lab, and I've seen the joy that she's had in her life as well as the joy she's given me." 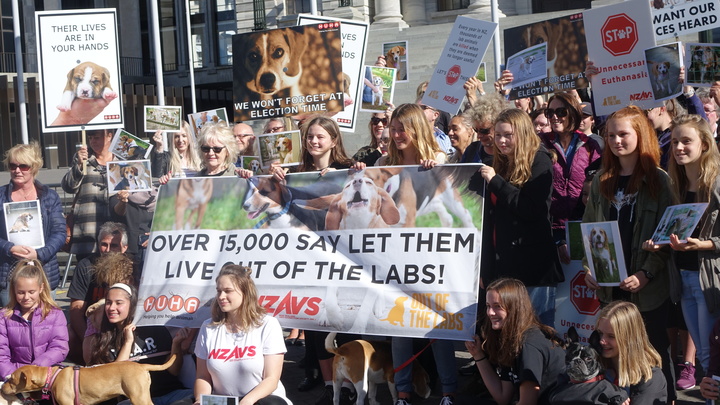 The protesters want former lab animals, including dogs, to be offered up for adoption instead of being euthanised. Photo: RNZ / Mei Heron

But it was not easy to start with, Ms Press-McKenzie said.

"When we first got these beagles they were shut down, they were closed off.

"People test on beagles because they're compliant, so these dogs had just gone through the motions, doing what they're told and lived a pretty torturous life."

Ms Press-McKenzie and her group Helping You Help Animals (HUHA) had rescued Doris and 32 other dogs, 11 years ago now, she said.

"It was a bit of journey teaching them to trust again, about fun and play, and about social interaction. But they're all in homes now and doing amazingly well."

Anti-Vivisection Society campaign manager Cressida Wilson said there were about 300,000 animals being used in New Zealand for research, and over a third of them were euthanised.

"Obviously animal rescue is a field where resources are a bit stretched but we're not forcing [rescue shelters] to take them, we just want research facilities to offer them up for adoption in the first place." 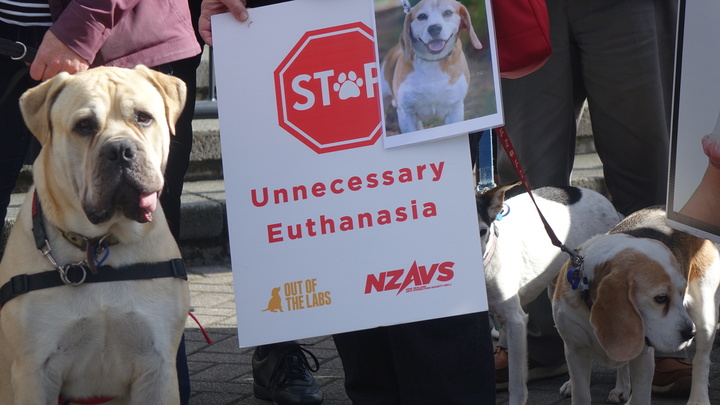 Dozens of dogs were among the group gathered outside Parliament. Photo: RNZ / Mei Heron

She spoke of a childhood memory in Wales where activists rescued dozens of beagles that were then adopted by local farmers.

"It became a part of my childhood to see beagles wherever I went and know they had been rescued.

"It's wonderful 40 years on to be championing your cause."

The petition will go to a parliamentary select committee to be considered. 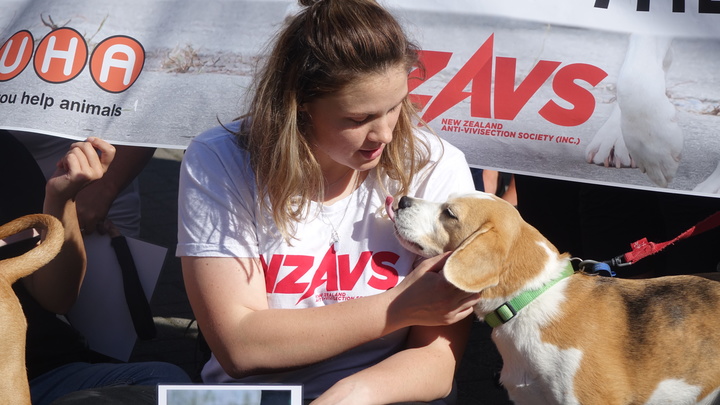