New Zealand First is backing its chief-of-staff David Broome and his 12-year-old son, who reprimanded a peace activist during yesterday's Anzac Day service.

The party said protesting on that day was disrespectful and designed to garner cheap media attention.

Peace Action protester Laura Drew and others were at the Wellington service holding a banner that read "lest we remember - no NZ support for war".

A Newshub reporter was interviewing Ms Drew when they were interrupted by Mr Broome and his son.

Ms Drew said Mr Broome had already expressed his views to them that morning, and returned with his son when the TV cameras were rolling.

"So when he [the boy] interrupted I just tried to listen to what he was saying to hear him out. He was obviously quite upset with our presence."

They had received a mixed reaction from the public that day, though a lot of it was positive, she said.

"We've had [people who were] really supportive of what we're doing and come and stand with us and give us a thumbs-up and hug.

"And we've had some people say they disagree and they don't think Anzac Day is a day to do that."

Ms Drew said her group would be back again next Anzac Day to protest. 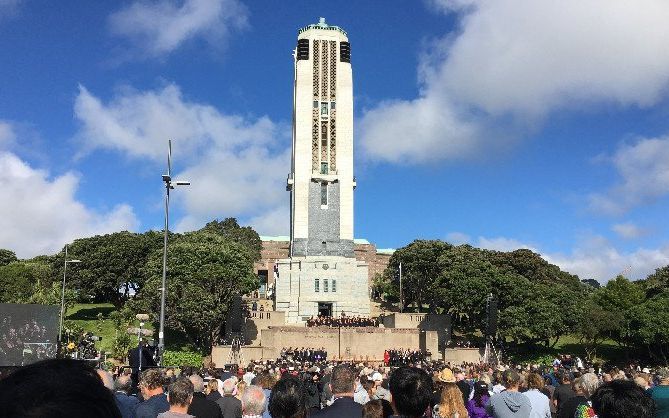 There were 364 other more appropriate days in the year to protest against war, he said.

"Free speech and the right to protest is an essential part of our democracy, but to go along to an event like that where people are trying to commemorate as a nation ... and criticise people for being engaged in war ... was just not appropriate."

'It's really not just a day of remembrance, it's a political day'

In 2007, another protester, Valerie Morse, set fire to a New Zealand flag during an Anzac Day service.

Her conviction for offensive behaviour was eventually thrown out by the Supreme Court after she argued she had the right to freedom of expression.

Anzac Day was a political event and the country's involvement in war should be discussed, Ms Morse said.

"Anzac Day is now used by the state as a means to promote current and contemporary wars.

Prime Minister Bill English said everyone had a right to protest as long as it was done lawfully and respectfully.