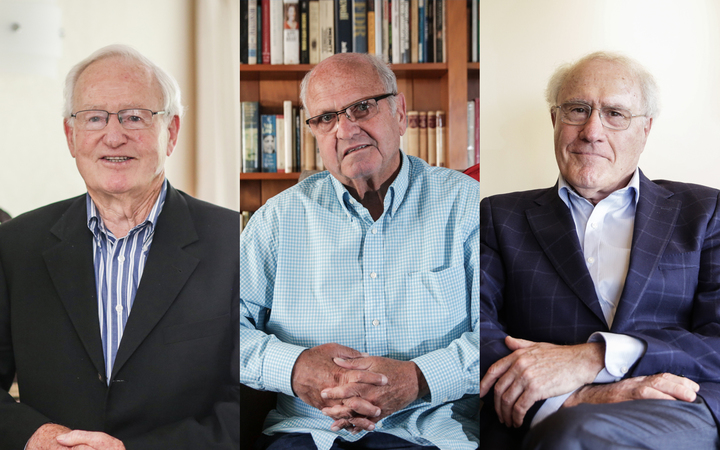 They shared their views with RNZ as part of The 9th Floor, a series of interviews with all the living Prime Ministers before John Key.

The idea could struggle to gain traction in Parliament, with both National and Labour rejecting the suggestion.

"Why do a sizeable proportion think it's not worthwhile? That's a hard question that most political parties want to avoid."

Mr Bolger said he used to oppose compulsory voting, but now wondered whether it should be "a requirement of citizenship".

"You can deface your vote if you like, but you have at least come up there and said - I don't like any of them."

Sir Geoffrey said democracy in the Western world was in "some sort of crisis".

"Hardly anyone votes... why would they not vote? It's quite hard to understand. Are they turned off by it? Do they think it doesn't matter?"

He said it should be against the law to stay home from the voting booth.

"If you are going to live in a democracy - which is supposed to be conducted by the people, for the people - then the people should have some duties. They should participate and they should vote."

In New Zealand, it is compulsory to register to vote, but voting itself is optional. Those who fail to register face a penalty of up to $200, but no one has been fined in recent elections.

That compares to about 91 percent in Australia last year, where non-voters face a $20 fine.

But Prime Minister Bill English hasn't been swayed by his predecessors' pleas, saying "no one's made the case for it".

"Part of the job of politicians is to persuade people it's worth voting - get out the vote," he said.

But deputy leader Jacinda Ardern has now poured cold water on the idea.

"You want your voters to be inclined to vote because they're engaged and... it's a part of citizenship. Compulsion doesn't achieve those aims."

She said many people don't vote because they don't believe it makes a difference or don't understand the differences between different parties.

"That puts the onus on us... I don't think compulsion fixes those problems. It certainly doesn't make voters feel more engaged."

ACT leader David Seymour said compulsory voting resulted in "all sorts of weirdos" being voted in.

He said the act of not voting is a statement in itself.

"You can lead a voter to the ballot booth, but you can't make them think."

New Zealand First's leader Winston Peters remained open to the idea, saying maybe it was "a subject for public discussion".

Voters have until 22 September to enrol, the day before the 2017 general election.