The ACT Party has announced a policy to give prisoners time off their sentences for learning to read and write aimed at reducing reoffending.

Its leader David Seymour announced the policy at the party's annual conference in Auckland this weekend. 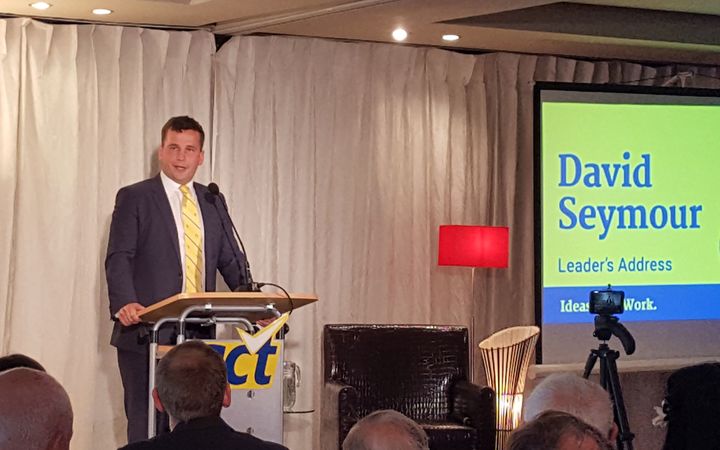 The policy would allow prisoners to cut time off their sentences by successfully completing basic literacy, numeracy, driver licensing and job-readiness courses.

Mr Seymour said the policy would allow more offenders to leave prison being able to read and respond to job advertisements.

He said inmates would be able to earn up to six weeks reduced sentence for every year of their term, depending on the types of courses completed.

"A model student serving a two year sentence could, under ACT's proposal, shave 12 weeks off their full sentence and save the taxpayer approximately $25,000 and if their learning prevents them from reoffending and going back to prison they save $100,000 a year," said Mr Seymour.

Attainment would be assessed against National Standards, the same as in schools.

"Our prison population blowout, is actually a reoffending blowout.

"The shocking fact is this: a large chunk of the prison population simply lacks the basic skills needed to lead a productive, normal life outside."

David Seymour told the conference 60 to 70 percent of prisoners were functionally illiterate.

"Two-thirds of prisoners can't read an employment contract, a tenancy agreement or even the road code."

The policy wouldn't apply to the worst violent or sexual offenders, or higher education.

But those prisoners who were already functionally literate and licensed to drive, would earn credits for training as a mentor, and teaching other prisoners.

Mr Seymour said similar incentive programmes were working overseas, such as in New York where there was a 20 percent lower recidivism rate among prisoners who earned an early release.

ACT would also cut red tape so community groups, such as the Howard League which coordinates volunteer-run rehabilitation programmes for inmates, could be quickly and easily approved for the work in prisons.

ACT also reiterated its policy of three strikes for burglary, where anyone convicted of a third burglary would be sentenced to three years in prison.

There are about 120 party faithful at the election-year annual conference, which will set the scene for its election campaign this year.

The theme of this year's meeting was ideas that work, focusing on the housing crisis in Auckland, inequality and the justice system.

The party's outgoing president John Thompson opened the meeting, saying it was much stronger than it was three years ago.

He said ACT wanted to rebuild its support and return five MPs at September's election.

"We are now not cutting ourselves up over trivial, inconsequential issues. We're unified, we're a cohesive force, leading into this September election."

Mr Thompson has been replaced by Auckland businessman Ruwan Premathilaka.

Mr Premathilaka urged the conference that now was the time that ACT cemented itself as the powerhouse of New Zealand politics.

"This year's election is priority number one. With changes in the political climate the opportunity is bigger than ever for ACT.

"Whilst others pay lip service and kick the political football, not one other party has looked at the problems in detail and suggested ideas that actually work."

Mr Premathilaka used the housing crisis as an example.

"We are the only party to fully digest the challenges and suggest ideas that would actually work."