Prime Minister Bill English has been praised for getting through a 15-minute phone call without upsetting United States President Donald Trump. 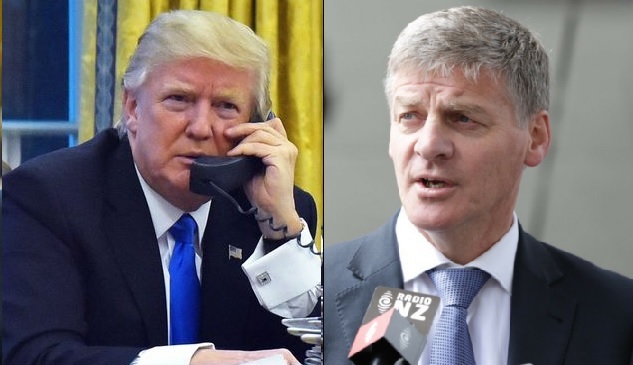 Mr English's convoy to an Auckland marae had to pull over so he could take the call yesterday morning.

Victoria University professor of strategic studies Robert Ayson said it was good that Mr English managed to tell Mr Trump he disagreed with his immigration policy, but that he should have brought up climate change and China.

The wait for New Zealand's phone call with the US President took on a whole new level of anticipation after Mr Trump reportedly called his conversation with the Australia Prime Minister "the worst ever" and insulted their refugee policy.

Speaking to reporters after his call with Mr Trump, Mr English said there were no fireworks during their discussion.

He said they talked about a lot of things - including the state of the relationship between the two countries, defence and security, and even the Super Bowl.

"That does suggest a reasonably civil and non-focused discussion but without perhaps getting into areas Mr Trump didn't want to cover.

"I think in that sense, for Mr English the main point to make to his domestic population was that he raised the immigration policy, indicated New Zealand didn't agree with it, but that they didn't make it a sticking point for the whole conversation. And if you can achieve that, I guess that's a plus for Mr English."

However, they didn't talk about climate change - even though Deputy Prime Minister Paula Bennett said it was likely to be on the agenda.

Green Party co-leader James Shaw said he did not expect it to be raised.

"Frankly I'm not surprised that they didn't talk about climate change. Bill English has never considered it much of a priority and it's clearly not a priority for the Trump administration - they don't even believe it's happening."

Labour leader Andrew Little wouldn't talk about the phone call, no would Winston Peters. A spokesperson for the New Zealand First leader said he was not part of the phone conversation so did not know whether Mr English's version of events was correct.

Professor Ayson said he would have liked Mr English to have brought up China in his discussion.

"Mr Trump has been quite prominent in his criticisms of China and there are concerns around the region [whether] Washington will take a steady and calm approach to this.

"It would have been good to know that Mr English had raised the importance of good relations between the US and China."

However, he sympathised with Mr English, saying he might not have had a choice about what he and Mr Trump talked about.