The government is being accused of pulling a U-turn on immigration, as it moves to reduce the number of new migrants.

It is tightening immigration numbers after weeks of pressure over record-high numbers of new migrants and working visa approvals, and today announced a range of changes aimed at reducing the number of new residents over the next year or so.

Under the changes, the higher end of the planning range for new residents over the next two years would be reduced from 100,000 to 95,000.

Those coming to New Zealand under the skilled migrant category would have to have 160 points before getting residency, rather than 140.

The number of people allowed entry under the family category would be more than halved from 5500 to 2000.

There would be a temporary ban on applications under the parent category - which has allowed any parents with adult children who have residence in New Zealand to also apply.

"They've certainly had a go at me and others for some time that we shouldn't be talking about immigration.

"Ever since the surge in immigration we've been saying that there are a growing number of issues and it became apparent this year that those issues were becoming acute." 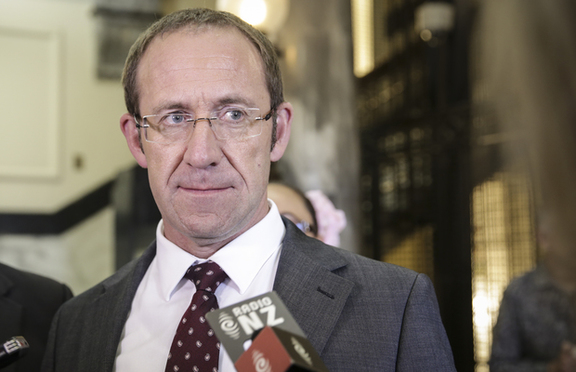 "The National Party's panicking at the polls.

"Their polls are saying that this matter's serious, they've ignored it for years, it's a dog whistle.

"But they don't mean to take any action, still, 1900 a week will come into this country."

But Immigration Minister Michael Woodhouse said the move was a scheduled review, and the government had always been willing to change immigration settings when needed.

"Well, there's very strong demand for residency places, over the last 10 years the government has set a planning range for the number of places available and we haven't really hit it.

"Last year it comfortably exceeded that range so we're going to have to take some steps to ensure that the quality of the skills we need still come in, but we can control the numbers."

Mr Little said one of Labour's greatest concerns was the impact of high numbers of temporary work visas, which had not been addressed.

"They've got to make sure that people coming in on those temporary visas are being lined up for jobs that cannot be supplied internally in New Zealand, and I think the problem we've seen is that the way they run the system, there's no check or oversight of that at all."

Mr Woodhouse said the issue of temporary visas was separate to that of visas that led to residency.

Temporary visas were not putting pressure on cities like Auckland, but were filling job shortages in the regions, he said.

"Those strongly growing areas - [visitors] like working holiday-makers aren't staying in Auckland. They are going out into the regions, where there are high levels of demand for labour."

The government still intended to consider if the number of temporary visa approvals, including for work and working holidays, was too high, he said.

He expected to make a decision on that by the end of the year.