Prime Minister John Key has been using his meetings with world leaders in Laos to push the case for Helen Clark's bid for the top job at the United Nations. 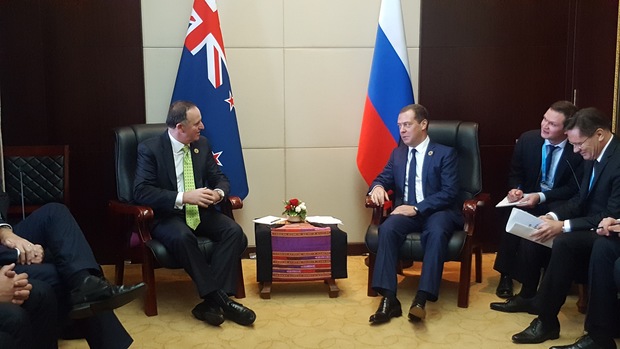 Mr Key has been rubbing shoulders with world leaders at the summit, which was taking place on Thursday evening New Zealand time.

He said he expected the agenda at the talks to be quite wide-ranging, from talking about trade to hearing from the Japanese Prime Minister about the Cherry Blossoms beating the All Blacks.

"There will be a range of issues discussed [today], one will certainly be trade," he said.

"In terms of the East Asia Summit, RCEP [the Regional Comprehensive Economic Partnership] is the trade deal, but I think for my part I'm going to try to push along the TPP [Trans-Pacific Partnership] and its importance.

"There will be some discussions about the South China Seas of course, but there is a feeling now that leaders are really waiting to see what happens between the Philippines and China as they sit down and try to nut out a solution to the most recent rulings that they have seen."

Mr Key said Russian Prime Minister Dmitry Medvedev approached him last night and joked that they were going to have to have a "tough conversation" at their formal talks about the UN Secretary-General job.

Mr Key said he also planned to talk to US President Barack Obama about the former New Zealand prime minister's bid during the summit this evening.