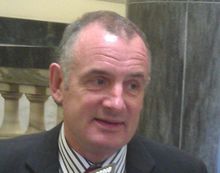 Trevor Mallard will not stand for election again in the Hutt South electorate where he has been the Labour MP since 1993.

He will instead seek a place on the Labour list and said he had been given the nod from party leader Andrew Little that should Labour win the election he would be nominated for the position of Speaker of the House.

Mr Mallard said his decision not to stand again in Hutt South had nothing to do with National's Chris Bishop working hard to make some ground in the electorate.

"We've polled in Hutt South and I'm not convinced that Chris Bishop has made any more traction there than any other MP," said Mr Mallard.

"In fact the local results very much parallel the national results with the significant increase for Labour since the election."

Mr Mallard said it was up to Labour's moderating committee to decide on list placements ahead of next year's election.