The US is still likely to ratify the Trans-Pacific Partnership, despite both presidential candidates saying they oppose the deal, a political academic says. 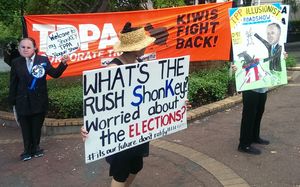 Ms Clinton's presidential running mate Tim Kaine has changed his stance on the deal, after earlier speaking out in favour of it.

US media is sceptical that President Barack Obama can get the deal through Congress before his term ends in January, but Auckland University politics lecturer Stephen Hoadley said there was still time for it to be ratified before then.

Dr Hoadley said political analysts in the US believed the agreement would be introduced to the Senate this year and would scrape through with a slim majority.

"The speculation by high-ranking American political figures who have been visiting New Zealand is that it will be introduced to the Senate. Now the prediction is by one political analyst with a fairly high rank in the administration is that it will pass just barely."

He said even if the deal isn't passed before Mr Obama leaves office, a Clinton presidency would probably still support it.